The Centers for Disease Control's NHANES surveys documented a massive increase in obesity in the United States between the 1960-62 and 2007-2008 survey periods (1).  In 1960, 13 percent of US adults were obese, while in 2008 that number had risen to 34 percent.  The prevalence of extreme obesity increased from 0.9 to 6.0 percent over the same time period!

Something has changed, but what?  Well, the most parsimonious explanation is that we're simply eating more.  Here is a graph I created of our calorie intake (green) overlaid on a graph of obesity prevalence (blue) between 1970 and 2008: 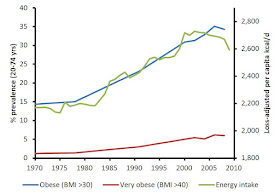 As you can see, the fit is extraordinary.  For those who may note that calorie intake appears to increase after obesity, I have to point out that the calorie intake graph has a point for each year, while the obesity graph has no points between 1978 and 1991.  Therefore, all we know is that obesity began to climb at some point between the 1976-1980 and 1988-1994 survey periods.  This is consistent with obesity being a result of increased calorie intake.

The careful work of Dr. Eric Ravussin and colleagues, based on what we know about the relationship between calorie intake and body fat, has shown that the increase in calorie intake over the last 40 years can single-handedly explain the increase in obesity in this country (2, 3)*.  This is something I discussed in my Boing Boing feature piece "Seduced by Food: Obesity and the Human Brain".

The question remains, why are we eating more calories today than we used to?  The answer is related to increased availability and consumption of energy-dense, seductive and palatable foods, including sweetened beverages, and advertising that makes us crave them (4).  However, nothing about human physiology or behavior is simple, and as always there's more to the story.

In future posts, I'll explore in more detail why we eat.  From this position of knowledge, based on the work of many outstanding researchers, I think it will be fairly clear why we eat more today than we used to.