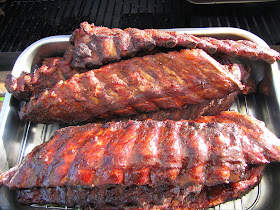 Is nothing sacred??  I love barbecue ribs as much as the next guy, and probably more.  Especially pork ribs.  But there's a reason we usually push away from the table feeling stuffed.

Imagine yourself eating ribs... raw and plain.  Not very appetizing, right?  Probably not something most of us would be tempted to overeat, despite a nutrient and calorie value in the same ballpark as cooked ribs.

Ribs are very high in fat, which is inherently rewarding, but the thing that puts ribs over the top is the cooking process.  As meat cooks slowly, the protein in it begins to break down, releasing glutamate, which has an attractive meaty flavor.  The rib bones also release glutamate into the meat, further accentuating this meaty flavor.

At the same time, the meat becomes soft-- easier to eat and easier to digest.  We put sauces on it that contain salt, sugar, and more glutamate (e.g., BBQ sauce, Worcestershire sauce), further accentuating its reward value.  We're giving the brain a concentrated combination of exactly what it's looking for in a food, and our motivation to eat is correspondingly high.


Image credit: Thogru via Wikipedia
Stephan Guyenet at 10:43 AM
Share