The most slimming tortillas in the world

It's no secret that I'm an avid food gardener.  In the last two years, I've moved from exclusively growing vegetables to growing large quantities of staple calorie crops, such as potatoes, flour corn, and long-storing winter squash.

Why do I put so much effort into growing my own food, when I could buy it easily and cheaply at the grocery store?  There are a few reasons.  First and foremost, I enjoy it.  Second, it allows me to grow the healthiest and best-tasting ingredients possible (although I think you can compose a very healthy diet from grocery store foods).  Third, it saves a bit of money.  And fourth, it gives me a window into the world of my ancestors.

The fourth point is an important one for me, and it's why I can justify making tortillas the hard way.  What's the hard way, you ask?  Well, first you plant corn.  Then you water and weed it for several months.  Then you harvest the corn, shuck it and dry it on the cob.

Next, you shell the cobs to get the kernels off.  Then you boil the kernels in lime water (calcium hydroxide; "cal"), which is an ancient corn preparation method called nixtamalization.  Then you rub and wash them to get most of the bran off.  Next, you grind them laboriously in a molino (wet grain mill), passing the dough through twice to get it fine enough for tortillas. 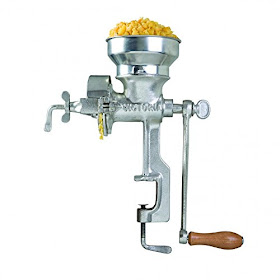 The molino is actually a modern innovation in the grand scheme of things-- for thousands of years before it, Native Americans used a stone metate to grind corn even more laboriously.

After the dough is made, you press it into tortillas, which you cook individually in a hot pan, and voilà!  All it took was five months of intermittent manual labor.

I'm not writing this to discourage you from growing corn and making tortillas.  On the contrary-- I find it very satisfying.  But the point is that it takes a lot of physical work, and when we think about the leanness and health of non-industrial cultures, we have to remember that it's not just about the foods they eat.  It's also about the work they have to do to get that food into their mouths, which is usually considerable.  This fact becomes extremely obvious when you actually go through the steps of putting food on the table in the ancestral way.

A few nights ago, my wife and I ground corn for tortillas.  We ground the equivalent of four pounds of corn (dry weight), which translates to about 7,500 Calories.  That will be a substantial portion of our diet for the next week.  I estimate that in the process of turning the molino, we burned about 400 Calories between the two of us.  And we probably burned even more while growing, harvesting, shelling, and cooking these four pounds of corn.  In the end, we get more calories out of the corn than we put into it, but I would guess we expend at least 20 percent of the harvested calories during the growing and preparation process.

My homemade tortillas may therefore be among the healthiest and most slimming in the world.  For the same reason, the tortillas, bread, rice, oats, potatoes, lamb, chicken, milk, eggs, nuts, and fruit eaten by non-industrial cultures around the globe are healthier and more slimming than their grocery store equivalents.