When we consider the health impacts of eating meat, cardiovascular disease is the first thing that comes to mind.  Popular diet advocates often hold diametrically opposed views on the role of meat in cardiovascular disease.  Even among researchers and public health officials, opinions vary.  In this post, I'll do my best to sort through the literature and determine what the weight of the evidence suggests.

Ancel Keys was one of the first researchers to contribute substantially to the study of the link between diet and cardiovascular disease.  Sadly, there is a lot of low-quality information circulating about Ancel Keys and his research (1).  The truth is that Keys was a pioneering researcher who conducted some of the most impressive nutritional science of his time.  The military "K ration" was designed by Keys, much of what we know about the physiology of starvation comes from his detailed studies during World War II, and he was the original Mediterranean Diet researcher.  Science marches on, and not all discoveries are buttressed by additional research, but Keys' work was among the best of his day and must be taken seriously.

One of Keys' earliest contributions to the study of diet and cardiovascular disease appeared in an obscure 1953 paper titled "Atherosclerosis: A Problem in Newer Public Health" (2).  This paper is worth reading if you get a chance (freely available online if you poke around a bit).  He presents a number of different arguments and supporting data, most of which are widely accepted today, but one graph in particular has remained controversial.  This graph shows the association between total fat intake and heart disease mortality in six countries.  Keys collected the data from publicly available databases on global health and diet: 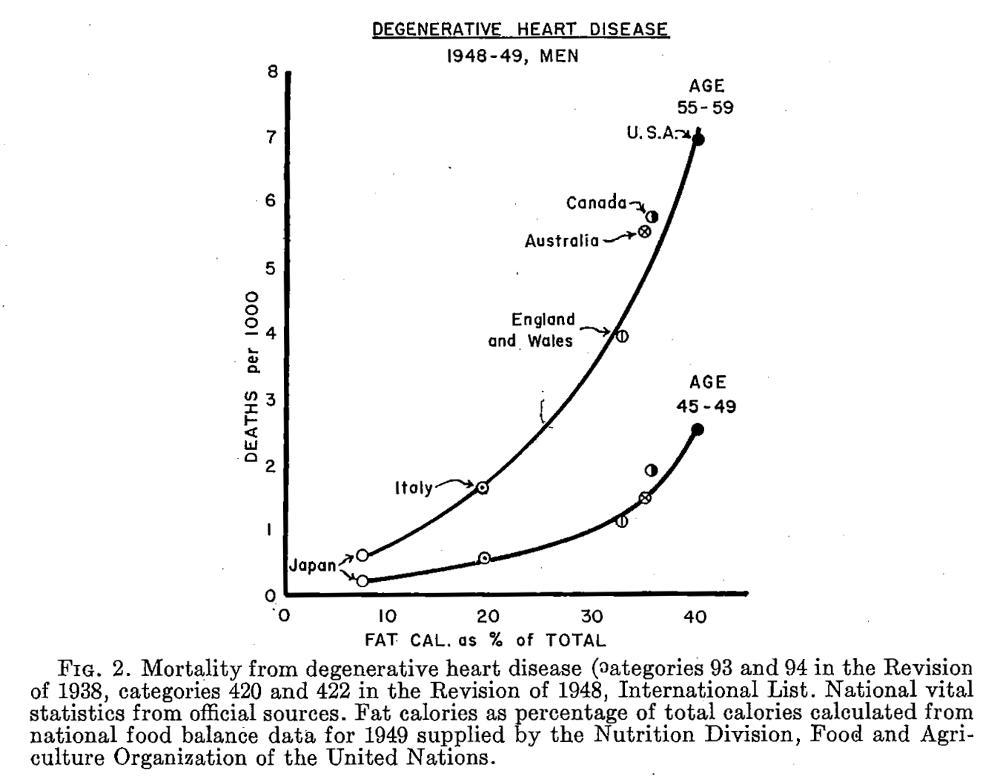