Beyond Ötzi: European Evolutionary History and its Relevance to Diet. Part I

In the previous post, I explained that Otzi descended in large part from early adopters of agriculture in the Middle East or nearby.  What I'll explain in further posts is that Otzi was not a genetic anomaly: he was part of a wave of agricultural migrants that washed over Europe thousands of years ago, spreading their genes throughout.  Not only that, Otzi represents a halfway point in the evolutionary process that transformed Paleolithic humans into modern humans.

Did Agriculture in Europe Spread by Cultural Transmission or by Population Replacement?

There's a long-standing debate in the anthropology community over how agriculture spread throughout Europe.  One camp proposes that agriculture spread by a cultural route, and that European hunter-gatherers simply settled down and began planting grains.  The other camp suggests that European hunter-gatherers were replaced (totally or partially) by waves of agriculturalist immigrants from the Middle East that were culturally and genetically better adapted to the agricultural diet and lifestyle.  These are two extreme positions, and I think almost everyone would agree at this point that the truth lies somewhere in between: modern Europeans are a mix of genetic lineages, some of which originate from the earliest Middle Eastern agriculturalists who expanded into Europe, and some of which originate from indigenous hunter-gatherer groups including a small contribution from neanderthals.  We know that modern-day Europeans are not simply Paleolithic mammoth eaters who reluctantly settled down and began farming.

There are two reasons why I chose this time to write about Otzi.  The first is that I've been looking for a good excuse to revisit human evolutionary history, particularly that of Europeans, and what it does and doesn't tell us about the "optimal" human diet.  The second is that Otzi's full genome was sequenced and described in a recent issue of Nature Communications (1).  A "genome" is the full complement of genes an organism carries.  So what that means is that researchers have sequenced almost all of his genes.

Otzi's digestive tract contains the remains of three meals.  They were composed of cooked grains (wheat bread and wheat grains), meat, roots, fruit and seeds (1, 2).  The meat came from three different animals-- chamois, red deer and ibex.  The "wheat" was actually not what we would think of as modern wheat, but an ancestral variety called einkorn.

Isotope analysis indicates that Otzi's habitual diet was primarily centered around plant foods, likely heavily dependent on grains but also incorporating a variety of other plants (3).  He died in the spring with a belly full of einkorn wheat.  Since wheat is harvested in the fall, this suggests that his culture stored grain and was dependent on it for most if not all of the year.  However, he also clearly ate meat and used leather made from his prey.  Researchers are still debating the quantity of meat in his diet, but it was probably secondary to grains and other plant foods. It isn't known whether or not he consumed dairy.

The New York Times just published an article reviewing some of the recent research on exercise, food intake and food reward, titled "Does Exercise Make You Overeat?".  I was planning to write about this at some point, but I don't know when I'd be able to get around to it, and the NYT article is a fair treatment of the subject, so I'll just point you to the article.

Basically, burning calories through exercise causes some people to eat more, but not everyone does, and a few people actually eat less.  Alex Hutchinson discussed this point recently on his blog (1).  Part of it depends on how much fat you carry-- if you're already lean, the body is more likely to increase hunger because it very much dislikes going too low in body fat.  Most overweight/obese people do not totally make up for the calories they burn through exercise by eating more, so they lose fat.  There is a lot of individual variability here.  The average obese person won't lose a substantial amount of fat through exercise alone.  However, everyone knows someone who lost 50+ pounds through exercise alone, and the controlled trials support that it happens in a minority of people.  On the other side of the spectrum, I have a friend who gained fat while training for a marathon, and lost it afterward.

Gil Butler has been working on a television show called Primal Chef, where he invites local chefs to make creative dishes from a list of Paleo ingredients, in a designated amount of time.  The format is reminiscent of Iron Chef.  The food is judged afterward by figures in the Paleo community.  Robb Wolf was a judge on the first episode.

Gil has invited me to be a judge on the next show, along with Sara Fragoso and Dr. Tim Gerstmar.  The next day, Sunday April 20th, Gil is organizing a catered Primal Chef event in Seattle, with Paleo dinner, speakers, entertainment, prizes, and a screening of part of Paleo Chef episode 1.  You can read the details and sign up here.  I won't be speaking because I don't have time to put together another talk right now, but I will be attending the event.

Lessons From Ötzi, the Tyrolean Ice Man. Part I 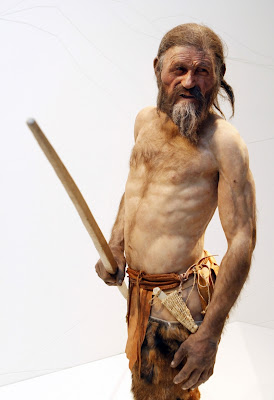 This is Otzi, or at least a reconstruction of what he might have looked like.  5,300 years ago, he laid down on a glacier near the border between modern-day Italy and Austria, under unpleasant circumstances.  He was quickly frozen into the glacier.  In 1991, his slumber was rudely interrupted by two German tourists, which eventually landed him in the South Tyrol Museum of Archaeology in Italy.

Otzi is Europe's oldest natural human mummy, and as such, he's an important window into the history of the human species in Europe.  His genome has been sequenced, and it offers us clues about the genetic history of modern Europeans. 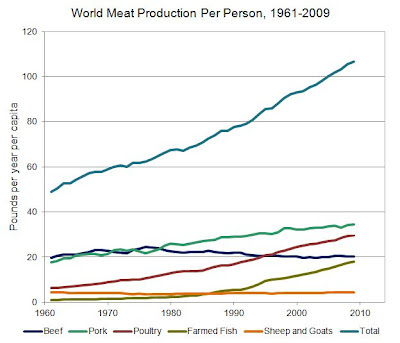 Total global meat production per person has steadily increased from 0.13 lbs per day in 1961 to 0.29 lbs per day in 2009*, a 120 percent increase over the last half century (currently in the US, average meat consumption is about half a pound per day).  Since meat consumption in the US and Europe has only increased modestly over time, this change mostly reflects greatly increased meat consumption over the last half century in developing countries** in Asia, Africa and South America.  In 1961, it's likely that most of the 0.13 pounds per day of meat was consumed in affluent countries such as the US, with not much consumed elsewhere (with some exceptions).  Historically, meat has always been expensive relative to other food sources in agricultural societies, so it's eaten by those who can afford it.

Email ThisBlogThis!Share to TwitterShare to FacebookShare to Pinterest
Labels: diet

Now that WHS readers around the globe have adopted the Eocene Diet and are losing weight at an alarming rate, it's time to explain the post a little more.  First, credit where credit is due: Melissa McEwen made a similar argument in her 2011 AHS talk, where she rolled out the "Cambrian Explosion Diet", which beats the Eocene Diet by about 470 million years.  It was probably in the back of my head somewhere when I came up with the idea.

April Fools day is good for a laugh, but humor often has a grain of truth in it.  In this case, the post was a jumping off point for discussing human evolution and what it has to say about the "optimal" human diet, if such a thing exists.  Here's a preview: evolution is a continuous process that has shaped our ancestors' genomes for every generation since the beginning of life.  It didn't end with the Paleolithic, in fact it accelerated, and most of us today carry meaningful adaptations to the Neolithic diet and lifestyle.