The Eocene epoch began 55.8 million years ago, just after the emergence of primates.  For most of the time between the beginning of the Eocene and today, our ancestors ate the archetypal primate diet of fruit, leaves and insects, just as most primates do today.

In contrast, the Paleolithic era, marked by the development of stone tools and a dietary shift toward meat and cooked starches, began only 2.6 million years ago.  The Paleolithic era represents only 5 percent of the time that shaped our primate genome-- 95 percent of primate evolutionary history occurred prior to the Paleolithic.  The Neolithic period, since humans domesticated plants roughly 10,000 years ago, accounts for only 0.02 percent.

Therefore, we are not well adapted to eating grains, legumes and dairy, and we aren't well adapted to eating meat and starch either.  Our true, deepest evolutionary adaptations are to the foods that sustained our primate ancestors for the tens of millions of years prior to the Paleolithic.  That's why I designed the Eocene Diet (TM).

The Eocene Diet is easy.  You simply eat these three foods:
Once a week, you also get to eat a two ounce portion of raw meat or liver, to mimic the occasional meat consumption of chimpanzees and other primates.
Here's a photo of a sample meal: 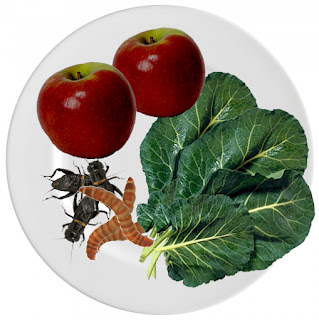 Fruit and leaves are easy to find, but what about insects?  With a little practice, you'll see that they're easy to find too, often for free.  Here are some tips:
How well does the Eocene Diet work?  Here's a photo of WHS reader Cristina B. after only three weeks on the diet: 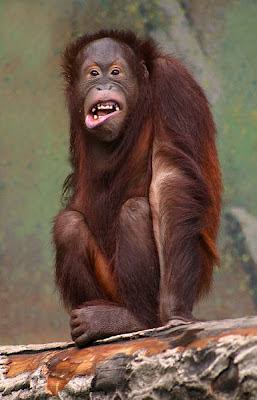 
April Fools!
Posted by Stephan Guyenet at 3:00 AM

Ahaha, brilliant post. Lot of truth in there, too. It's easy to look to historical dietary patterns as optimal relative to the SAD, but in the end our past only provides clues into how we might go about optimizing our diets. In the end, chemistry trumps traditionalism!

Smart people, who have a vocabulary of 5,6,or even 7 letter words, make the best comedians.

Amusing post. The April fools tag spoils it a bit. Remove it.

I think it is very likely that our ancestors from waaaaaay back were hugely insectivorous. Insects are great nutrition. In Thailand they eat them today. I admit I could not stomach it, but it is superb nutrition none the less. Paleolithic Man himself from only 30,000 years back probably ate vast amounts of insects.

As far as your April fool's thing (laugh out loud )!

Thanks so much for the laugh this morning! Hilarious. :D

My husband wants to know if it's legal to dip the bugs in hot lava before consumption. ;D

Honestly, I have been researching the consumption of insects recently. Anyone else reading here and interested can check out cicadas. I had no idea there's actually a fair few people in North America who eat them.

Last spring there was a bumper crop.

I may try it myself this year:

I think I found my new diet. I have ants all over the place right now, and I think I just found a new solution ;)

No matter how satirical this was intended, someone somewhere has already advocated it in all seriousness.

Will you be boxing up those meals and selling them on the Internet? Sign me up. I'd love it if I didn't have to comb my hair.

Not to disillusion anybody who is thinking about taking up the Eocene diet and hoping to get the same results as Cristina B., but I heard from a friend of a friend that Cristina B. drinks a gallon of orange juice every day.

I love that this year you actually ended the post with the qualifier that it's April Fools. I look forward to these every year!

I was hoping you'd post a photo of YOU about to dig into that meal! Thanks for a good laugh which is, if you haven't heard, good for my health.

Can you expand a bit on this diet?

Can I use powdered bug instead of eating grubs or do you think the proteins will get denatured?

You mention apples in the picture but surely they wouldn't have existed in that time? I can get some fossilised seeds from the internet for $18 a seed, do you think that's worth it?

What is your opinion on the non-nutrition related aspects of the eocene that might have contributed to health? For example faeces flinging? I read on a blog last week that this is the reason that people have bad results on the eocene diet as they don't fling their crap around enough.

What are your thoughts on supplemental CO2 to mimic the possible slightly higher levels in the atmosphere (though I know this is disputed)?

I don't know...do you have yur facts straight? She looks like she has a bit of PCOS.

That was hilarious!
(I actually thought you were cueing up for Dr. Lustig on 60 minutes tonight ...
http://www.policymic.com/articles/6330/sugar-is-toxic-says-dietary-scientist-robert-lustig-on-60-minutes )

Cristina B is ginger?!!!

Maybe we could get these diets elevated to cult status by some sect of kipping exercise fetishists.

I admit I could not stomach it, but it is superb nutrition none the less.thanks for sharing.....

I have to admit, that reading this a few days after April 1st I was a little baffled until I reached the end.

I've not had as much fun reading blog post, or it comments, since I read about the 83 year old woman who's suing Apple after she walked into a glass window and broke her nose. Read the comments for a good dose of satirical fun: http://forums.macrumors.com/showthread.php?t=1348738

nice opinion.. thanks for sharing...

You did a great job on this! I was ready along, getting more and more sarcastic, thinking that you must have ditched all your education.
Then I saw your photo of a successful dieter and was so relieved. Good joke.

Eggs, you forgot eggs. Every morning, the eager early birds were so busy foraging for THEIR insects that primates merrily stole their eggs. We must add eggs in that food basket.