In the last post, I reviewed a study by Gerald Reaven's group showing that insulin resistance strongly predicts the risk of cardiovascular disease over a 5-year period.  In 2001, Reaven's group published an even more striking follow-up result from the same cohort (1).  This study shows that not only does insulin resistance predict cardiovascular disease risk, it also predicts a variety of age-related diseases, including hypertension, coronary heart disease, stroke, cancer, type 2 diabetes, and even overall mortality risk.

The study was very similar to the previous one: first, they recruited 147 lean and overweight middle-aged volunteers without diabetes or diagnosed cardiovascular disease.  Then, they measured the volunteers' insulin sensitivity.  While most studies of this nature indirectly estimate insulin sensitivity simply by using a formula based on fasting insulin and glucose measurements (HOMA-IR), which can be inaccurate, Reaven's group directly measured insulin sensitivity using a gold standard method*.

Next, they waited 6 years and watched who developed a variety of diseases over that period.

As in the previous study, they divided the volunteers into three equal-sized groups based on their degree of insulin resistance. Group I had the lowest level of insulin resistance, group II had an intermediate level, and group III had the highest level.  The following graph illustrates the number of people who were diagnosed with disease (and/or died) in each group over the course of the study: 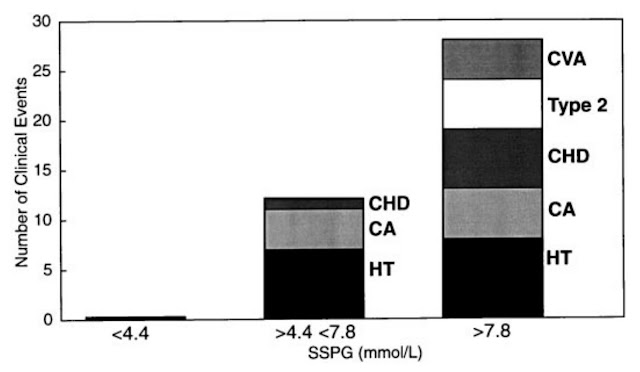 This is an incredibly striking result.

Again, people who were most insulin-sensitive also had a variety of other healthy signs, including less body fatness, higher physical activity, lower blood pressure, lower levels of LDL ("bad") cholesterol, and the higher levels of HDL ("good") cholesterol.  And again, after mathematically adjusting for all of these other factors, "only insulin resistance was an independent predictor of the 40 age-related clinical events."

Many researchers, including myself, believe that insulin resistance is a central feature of a metabolic dysfunction syndrome that drives much of the chronic disease of the modern affluent world.  Reaven's results strongly support this contention, since they show that insulin resistance clusters not only with a variety of other metabolic disturbances, but also with the risk of a variety of common chronic diseases.


* Insulin suppression test, which is a direct measure of insulin sensitivity that is highly correlated with euglycemic-hyperinsulinemic clamp (4).  The output is "SSPG" or Steady-State Plasma Glucose, which is the level of blood glucose that results from "clamping" circulating insulin at a standardized level.  The higher your blood glucose (SSPG) is at a given level of circulating insulin, the more insulin-resistant you are.
Posted by Stephan Guyenet at 9:57 AM

Graph seems to show glucose levels (if sspg is steady-state plasma glucose), not IR. Did they also measure IR directly?

What was the "gold standard" test? There are a couple of asterisks where you mention it, but they are coy and do not yield up any information, and it's not in the PubMed abstract, either.

Reaven's work is fantastic. When did you first come upon it Stephan?

Ivor Cummin's argues here for the necessity of an IR-context to render markers such as ApoB relevant & predictive to any useful extent http://www.thefatemperor.com/blog/2015/4/30/insulin-resistance-the-primary-cause-of-coronary-artery-disease-bar-none-lchf

Although we may disagree about the importance of IR in determining excess fat accumulation (obesity) it's nice to see you giving it importance in the larger metabolic syndrome umbrella.

What's the gold standard test? Also, what do you think is best in measuring chronic low grade inflammation? Thx again for your work and incredible insights.

To those asking about the gold standard test, Stephan probably copy/pasted a few sentences from the previous article, where it is mentioned (double **).

SSPG is a measure of insulin action. It's the steady-state plasma glucose level during an insulin suppression test. In other words, when insulin levels are artificially "clamped" at a known and constant level, what level of blood glucose results? The higher the BG with a given amount of insulin, the lower the insulin sensitivity. It's an alternative to the hyperinsulinemic-euglycemic clamp technique, and the two measures are highly correlated (r = 0.93).

Please see my response above. For more information, do an internet search for "insulin suppression test".

I've been familiar with other work of his for many years; it came up periodically when I was learning about the relationship between obesity, insulin secretion, and insulin action. IIRC, he was one of the first (perhaps the first?) to hypothesize that hyperinsulinemia is a compensatory adaptation to insulin resistance. Yet I had somehow missed these two papers until recently. Thanks for the links; I'll check them out.

Please see my response above.

Thanks, Stephan. That makes sense. I do wish bloggers would define acronyms on graphs they use to illustrate their blogs. I'm not referring to you specifically, but in general. I sometimes just delete because I don't want to take the time to track down the definitions.

It might be interesting if they measured BVI instead of BMI.

Yup. Now I understand why so many people were confused by this post.

That's a good question. I think, as you hypothesize, that many insulin-resistant "lean" people would actually turn out to be "skinny-fat" if you put them in a DXA or MRI machine. If you look at insulin sensitivity vs. BMI and consider only younger people who don't have illness-induced weight loss, people in the very lean BMI category (20 and below) almost all have high insulin sensitivity. I think that's because when BMI goes that low, there is not much room for adipose tissue. Those people are truly lean. But there are also very lean people at higher BMIs; it's just hard to distinguish them from skinny-fat people using only BMI measures.

Some people are never going to become overweight because they are genetically resistant, but if those people are sedentary and eat poorly, they can still end up with an unfavorable body composition that promotes metabolic disease.

How does lipodystrophy fit into this picture? These people have no fat and are very insulin resistant. I know you said "almost all," but the physiology is interesting.

Yes, lipodystrophy is an interesting case. It turns out that leptin plays an important role in glucose control, and the main reason why lipodystrophic patients end up insulin resistant and diabetic is because they have extremely low leptin due to their atrophied fat stores.

Leptin treatment improves their glucose control, and in fact lipodystrophy is currently the only condition for which leptin therapy is FDA approved.

Then the question becomes, what is the best diet to prevent insulin resistance?

SoccerGuru said: "Then the question becomes, what is the best diet to prevent insulin resistance?"

Reduced levels of the endogenous hormone insulin-like growth factor (IGF-1) are associated with increased risk of insulin resistance and type two diabetes. Two factors that can cause decreased synthesis of IGF-1 are magnesium deficiency and use of cholesterol lowering statins as described in the following studies.

Conclusion: Magnesium supplements may be needed to reduce risk of insulin resistance.

Atorvastatin (a cholesterol lowering statin drug) administration is associated with dose-related changes in IGF-1 bio-availability. Reduced IGF associated with diabetes. Objective: IGF levels, their binding proteins (IGFBPs) and high-dose statin therapy have been linked to the development of diabetes. -----Conclusions: IGF1, IGF2 and IGFBP3 concentrations decreased following atorvastatin therapy. A differential effect of low- vs high-dose atorvastatin on IGFBP1 concentrations was observed with likely implications for IGF bioavailability. The dose-related differential impact of atorvastatin treatment on concentration of IGF proteins merits investigation as a mechanism to explain the worsening of glucose tolerance with statin therapy. PMID: 23333902

Statin use and the risk of diabetes mellitus in post-menapausal women in the Women's Health Initiative. Statin use at baseline was associated with an increased risk of DM (hazard ratio [HR], 1.71). This association remained after adjusting for other potential confounders (multivariate-adjusted HR, 1.48; ) and was observed for all types of statin medications. pubmed 22231607

So, the causes if insulin resistance are: too many calories, not enough specific nutrients, too much stress (cortisol and poor sleep), not enough exercise, too much PUFA (accumulates with age and destroys mitochondria), toxin overload from drugs/environment and perhaps wonky gut flora....what else?