Hydration: Attempt Only Under Medical Supervision 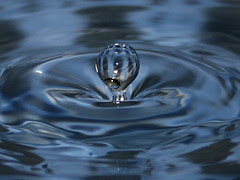 I've noticed how the word "hydration" has crept into the popular lexicon in the last decade or so. Before that, we were so primitive, we just "drank water". Now you need a PhD just to put a glass to your lips. I'm not sure I'm qualified!

I've been hearing so many people, including health professionals, tell me to drink 8 glasses of water a day for my entire life. In my middle school health class, I was told by my hydrophilic teacher that I should be urinating every hour and my urine should always be clear. For my whole life, I've thought it was nonsense. Yet the message has reached people. Walk around any college campus and you'll see undergrads faithfully carrying around their endocrine-disrupting plastic-water everywhere they go.

You see, our bodies have this very sophisticated mechanism to ensure water homeostasis. It's called thirst. If we need so much water to be healthy, why aren't we thirsty more often?

I skimmed through a paper today in the Journal of the American Society of Nephrology that reviews the evidence for health benefits from drinking more water than your thirst demands. Their conclusion: there's no evidence to suggest it helps anything. Water is just a nice harmless placebo.

The term "hydration" has helped fuel a whole industry to satisfy our need for hydration technology. Gatorade claims it hydrates better than water. It must be the high-fructose corn syrup and yellow #5... And make sure to bring your "hydration pack" when you go on your 20 minute jog; you might get lost and end up in the Kalahari desert!

I actually think the water craze isn't totally harmless. Drinking large amounts of water with a meal interferes with digestion by diluting digestive enzymes and stomach acid. Drinking a tall beer does the same. Wine is better because it tends to be a smaller volume.

As far as I'm concerned, with minor exceptions, the only thing to drink is water. I'll have an occasional glass of wine, beer or whole raw milk, but 99% of what I drink is good old-fashioned dihydrogen oxide.

The only time I drink a large amount of water without being thirsty is if I'm about to do vigorous exercise or spend time outside in hot weather.

Thanks to Snap for the CC photo.

Posted by Stephan Guyenet at 6:01 PM

I wonder if elderly people might be another exception to the rule of only drinking when thirsty. I've heard as the body ages the thirst sensation slightly decreases.

There was an NPR piece this week that concurred with what you're saying. Unfortunately, in the middle of the piece, the head of the weight management center at the University of Pittsburgh, assured listeners that, "other zero-calorie options such as diet sodas are fine, too." Maybe she's worried if people stop drinking diet soda and getting metabolic syndrome, she won't have a job anymore.

Oh, one of my favorite old wives tales! Thanks for debunking (and glad to hear NPR debunking it, too). What I've heard is that you need about 2.5 liters of total water to replace that lost through breathing, sweating, urinating, and chemical reactions like hydrolysis of fats. But if you eat whole, natural foods, a lot of that comes from foods. (If you're eating mostly potato chips and toast, on the other hand, you're getting a lot less water than if you eat an apple and a chicken thigh.)

I also wonder about the long-term impact on the kidneys of asking them to move all that water across a concentration gradient.

The only exception I might add to your list is acute illness, like colds or flu or my current complaint, stomach flu. I wasn't at all thirsty the first day of the flu and hardly drank anything until my husband came home and persuaded me to guzzle down some fluids. I started to feel better immediately.

I don't know, I've wondered if it strains the kidney to drink too much as well. It's certainly not a natural behavior.

I drink about a gallon of water a day. Doesn't appear to be hurting me, and my body composition has improved pretty dramatically in the past year.

Yeah it's probably neither hurting nor helping.

I wish you would skim through the book 'your body's many cries for water'. Now, I think he's one of those, "I found a hammer, the whole world is a nail" guys, and some of the book is more about his own stuff than the issue at hand. But he explains something I think is worth considering. Learning Theory is pretty straightforward. You ask for X, and someone either ignores that or punches you in the liver, you quit asking for X. Well the body knows water. It doesn't know the zillion other crappy things we drink (I see endless people feeding toddlers and younger koolaid and dr. pepper in sippy cups, gah!). Some of which are the equivalent of being punched in the liver, and some of which (due to how molecules blend? Not a scientist, don't remember that part very well) don't really fill the bill just because they are 'wet'. He theorizes that people gradually LOSE the 'thirst reflex' because of this long term response to thirst being not-water or harmful-fluids.

Now, there are two things I just have to mention: (1) I hated water. But when I began drinking it regularly, I actually found myself starting to get thirsty FAR more often, and *specifically for water* which was weird. This implies to me maybe there is something to the 'diminished thirst reflex' - which being hard-wired biologically maybe can be restored.

And (2) I have seen the same effect with protein. Being overweight I used to live on pasta, bagels, and other 'healthy whole grain!' foods which nearly killed me, and my diet is now almost entirely meat, with periods of something more creative but less nutritious usually. I find that when I do not get meat regularly, my body now actually starts to WANT it, it specifically wants *meat*, not anything else. It occurred to me I had never had that effect before, and it reminded me of the thirst effect.

Maybe when we get hungry and we eat french fries and a coke, or pizza (god I love pizza. god it is death-in-the-round...) our body starts gradually losing some of the innate response to "hey eat some protein," too. (It's possible men, given the eating habits of those I've known, have never been as protein deprived as I used to be to even notice something like this.)

So I'm saying that you're right, we have the thirst reflex. Just like we have the "you ate enough calories quit eating" reflex -- but that is clearly all screwed up in many people for a long list of reasons (including the calories being unavailable to them) -- so I think it's worth considering that the thirst reflex *itself* may have some problems as a result of modern diet.

I know this post is really old, but I'm only just reading it now.
I would like to point out that sometimes you do not feel thirsty but you are, in fact, dehydrating.

I live in Israel, where it is really hot during the summer (OK, it's hot almost all year long, but in the summer it is especially hot). There is a serious problem with dehydration here, because people often don't feel thirst or even realize they are dehydrating until they start to feel symptoms.

My point is that in certain situations, it would be silly to trust only your sense of thirst.