Eating Down the Food Chain 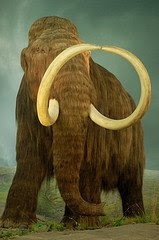 Europe once teemed with large mammals, including species of elephant, lion, tiger, bear, moose and bison.

America was also home to a number of huge and unusual animals: mammoths, dire wolves, lions, giant sloths and others.

The same goes for Australia, where giant kangaroos, huge wombats and marsupial 'lions' once roamed.

What do these extinctions have in common? They all occurred around when humans arrived. The idea that humans caused them is hotly debated, because they also sometimes coincided with climactic and vegetation changes. However, I believe the fact that these extinctions occurred on several different continents about when humans arrived points to an anthropogenic explanation.

A recent archaeological study from the island of Tasmania off the coast of Australia supports the idea that humans were behind the Australian extinctions. Many large animals went extinct around the time when humans arrived in Australia, but that time also coincided with a change in climate. What the new study shows is that the same large animals survived for another 5,000 years in Tasmania... until humans arrived there from the mainland. Then they promptly went extinct. That time period didn't correspond to a major climate change, so it's hard to explain it away.

It's a harsh reality that our big brains and remarkable adaptability give us the power to be exceptionally destructive to the environment. We're good at finding the most productive niches available, and exploiting them until they implode. Jared Diamond wrote an excellent book on the subject called Collapse, which details how nearly every major civilization collapse throughout history was caused at least in part by environmental damage. It's been a hallmark of human history since the beginning.

I don't think it will take much to convince you that the trend has accelerated in modern times. Ocean life, our major source of nutrient-rich wild food, has already been severely depleted. The current extinction rate is estimated to be over 1,000 times the baseline, pre-modern level, and rising.

Humans have always been top-level predators. We kill and eat nutrient-dense prey that is often much larger than we are. But today, the extinction of such walking meat lockers has caused us to eat down the food chain. We're turning to jellyfish and sea cucumbers and... gasp... lobsters!

While it's true that we've probably always eaten things like shellfish and insects, I find it disturbing that we've depleted the oceans to the point where we can no longer sustainably eat formerly abundant carnivorous fish like tuna. We need to make a concerted effort to preserve these species because extinction is permanent.

Haha, well I know some people who might disagree with you. Although I hope they don't decide pick a fight in the comments section.

Okay, I voluntarily withdraw the facetious comment in order to obviate the possibility of inciting conflict on your blog.

No fair. I love "insightful" comments, and now I didn't see it.

On a serious note, however, I always observe that nobody ever worries about cattle and other livestock going extinct. I also observe that they primary reason for that is the property upon which such livestock resides is typically privately owned, maintained and defended.

rnikoley makes an interesting point. While all life faces a possibility of extinction, some species are at more immediate risk than others. Species (besides ours) that are doing well are ones we domesticate.
There's also invasive species that are able to rapidly adapt and outcompete indegenous species and species that have adapted to survive in human-altered landscapes.

Actually, the number of breeds of livestock, just like the number of species of cultivated plants, has gone dramatically down in the last century. Check out this FAO report
-- As of ten years ago, nearly half of livestock species were extinct, and almost half the remaining ones were endangered.

Decreased biodiversity of our food supply has implications for our nutrition and taste buds of course, but the implications are heightened by climate change. Species and crops do best under specific conditions in specific regions.

"Bacteria patties" has to be the least appetizing thing I've heard in a while. Except for "ranch dressing."

Uh, Debs, you did a bit of a bait & switch there. Just skimming the report quickly, I see that "species" are fine, while breeds within species have gone "extinct."

Just speculating, because I don't have the time right now, is it possible that the breeds were man-made to begin with, i.e., selectively bread, and they exist no longer as a result of market conditions, profitability, etc?

Let's say, just for the sake of argument that it was suddenly determined that the American Bald Eagle was exceptionally tasty and that the legal way could be cleared to cultivate it for sale.

Can you reasonably speculate on what might happen? Among other things, I'd expect to see selective breeding to create new breeds within the species (for profit, of course), and that some of such breeds might be more resistant the environmental conditions that threaten the species in the wild.

Well I certainly hope cattle don't go extinct. I suppose the decline of the oceans is a 'tragedy of the commons' problem.

Good point, there are definitely some 'winners' in this process.

Mikoley, I was just incorrectly using "species" when I meant "breed." That's what I get for typing my thoughts quickly; thanks for catching it.

Of course, if a species like cattle used to consist of a great number of breeds and now consists of far fewer, decreased diversity might well increase the likelihood of other problems, extinction being one of them.

Regarding the tragedy of the commons, of course the most direct solution is to truly privatize everything. I personally have no problem with that, but I understand that others do, because then access becomes limited based on "what the market will bear." The dropped context there, in my view, is that's precisely the sort of mechanism that naturally protects resources.

That said, the next "best" solution is some sort of licensing mechanism where the licensee has a financial incentive to be a good steward and the conditions of [exclusive] licensing attempt to balance access that's somewhat independent of pure market dynamics and preservation of the resource(s).

I have a suspicion that you'll find this very interesting, on the depletion of oceans. Seems that Alabama fishermen had this problem in the 50's and have a 50-year jump in solving it.

I read that in the print edition over breakfast in 2001 (bacon & eggs, of course :). I'm glad it impressed me enough to remember it.

By the way...your blog is pretty much top of my list, among a very select few others. I have, at last count, about 22 post of yours sitting and waiting to be blogged about at my place (in groups, i.e., K2, Kitavans, etc.). I'm just waiting to finish "Nutrition and Physical Degeneration," absolutely one of the most eye-opening books I've ever read.

I've been taking the Green Pastures butter oil, along with cod liver oil for about two months. Results are nothing short of amazing. For instance, plaque buildup on my teeth has vanished, so have stains, and I never really feel like brushing. A wooden toothpick (an ancient tool, I would speculate) is sufficient to clear trapped food debris.

Just saw this article that's related to the thread.
You know something's seriously wrong when the price of rat meat becomes too expensive for the poor.

Thanks. I'm glad you're having so much success with the cod liver and butter oil combination! It's interesting that it got rid of stains too.

I see your point about private incentives. Ultimately, if we want to have fish left in 50 years we'll have to reduce the amount people are eating. That will probably mean only people with dough will be privy. An unfortunate situation, but better than letting the fishery collapse.

The problem with privatizing the ocean is that it's all interconnected. If you dump a bunch of mercury off the coast of Washington, it ends up everywhere. There's no way to avoid the tragedy of the commons without either having one private entity that owns the whole thing, or consistent international laws that govern all of it.

I think there are reasons why humans evolve to such a level.
We are not blessed with sharp nails or tooth and cannot run very fast. Tools helped us become smart in earlier phase of evolution.
But I believe humans also practiced cannibalism which means competition within same species. This made us evolve to very smart specie.
For last 10000 years we are repeatedly destroying our own food for short term luxury. We aren't evolve to give importance to long term harmony against short term luxury.
This cycle is not going to end till we make this planet barren.

May be the best thing that could happen to nature (if it could happen quickly) will be ice age or a nuclear war. This could give nature enough time to again grow dense and wild and humans to learn from his mistakes.