I just found another very interesting study performed in Japan by Dr. Hajime Haimoto and colleagues (free full text). They took severe diabetics with an HbA1c of 10.9% and put them on a low-carbohydrate diet:

What happened to their blood lipids after eating all that fat for 6 months, and increasing their saturated fat intake to that of the average American? LDL decreased and HDL increased, both statistically significant. Oops. But that's water under the bridge. What we really care about here is glucose control. The patients' HbA1c (glycated hemoglobin; a measure of average blood glucose over the past several weeks) declined from 10.9 to 7.4%.

Here's a graph showing the improvement in HbA1c. Each line represents one individual: 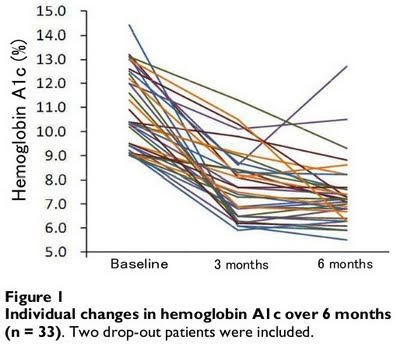 Every single patient improved, except the "dropout" who stopped following the diet advice after 3 months (the one line that shoots back up at 6 months). And now, an inspirational anecdote from the paper:

One female patient had an increased physical activity level during the study period in spite of our instructions. However, her increase in physical activity was no more than one hour of walking per day, four days a week. She had implemented an 11% carbohydrate diet without any antidiabetic drug, and her HbA1c level decreased from 14.4% at baseline to 6.1% after 3 months and had been maintained at 5.5% after 6 months.

That patient began with the highest HbA1c and ended with the lowest. Complete glucose control using only diet and exercise. It may not work for everyone, but it's effective in some cases. The study's conclusion:

...the 30%-carbohydrate diet over 6 months led to a remarkable reduction in HbA1c levels, even among outpatients with severe type 2 diabetes, without any insulin therapy, hospital care or increase in sulfonylureas. The effectiveness of the diet may be comparable to that of insulin therapy.

The glucose change is impressive. Is the cholesterol anything to worry about? I'm a total layperson here, not a doctor or scientist, following a low carbohydrate regiment. I feel better than I have in years, but I've not had my cholesterol checked. Maybe I should?

I'm a pharmacy student, and I just got dinged on an assigment in which I was supposed to write a recommendation for a type 2 diabetic patient who had started a low-carb diet for not telling her to go back to a "balanced" diet.

At long last and well overdue there is starting to be some "evidence" backing up the thousands of anecdotes to be found even in the ADA Forum (IMNSHO the best part of the site).

Worth getting a Full Lipid Panel IMO, the usual changes are an increase in HDL and trigs dropping through the floor. LDL may increase, decrease or stay the same - this can probably be tweaked with further changes to fat intake.

To rps (sigh!) ask if they would recommend increasing penicillin intake for someone who is allergic to penicillin

Sadly thats what most diabeticians would call this.

I will be looking for Jenny Ruhl's low key take on this study.

One point, your graphic display visually reminds me that so much analyis of "before and after" makes use of difference of the averages, RATHER than average of the differences. It's one way to eliminate the confounding effect of individual effects.

It looks like many of the Hba1c lines in the graph trend upwards at 3 months. I wonder why. Maybe compliance issues.

One point. The diet here was 30% carbs with is far from "low carb."

Because of that huge ± it is hard to know which graph line correlates with which intake.

Shooting for a percentage target rarely gives the 5% A1cs associated with health.

Instead, if people test after meals at 1 or 2 hours and cut down their carb intake until they do not exceed 140 mg/dl at 1 hour, they will see 5% A1cs if they still have functional beta cells.

Note: Many people diagnosed with Type 2 actually have slow autoimmune Type 1 (LADA) and for them, diet is not enough. They need insulin at meals.

Japanese people are very homogeneous so it makes sense that they would react in a relatively common way. America is extremely heterogeneous which is why an experiment like this might not be as statistically significant. The real way to approach this is to determine people's metabolic type and have them eat that way and see if there are changes. A "carb-type" might do horribly on this "low-carb" diet.

LOL! Jim Purdy, welcome to the fold. When I first started eating more animal products (I was never completely vegetarian, but pretty darn close), I was very misinformed, health-wise, and I thought I was "letting myself go." I no longer cared if the saturated fats, etc., were going to kill me. This was about 10 years ago. After a couple of years, I'd lost about 30 pounds without even trying. It was very gradual and leveled off at a good weight for me. I didn't know what to think of it, but I "jokingly" told people that my new diet mantra was that fat is good. I found it impossible not to overeat when I wasn't getting enough fat.

Obviously, it's a lot more complicated than "fat is good," which I've learned over the past year or so as I've really gotten interested in nutrition. But that one change--eating animal fat--has done wonders for me. I thought I felt pretty good before, but I had no idea how much I had been struggling until I started feeling better. I hope you experience better health as well.