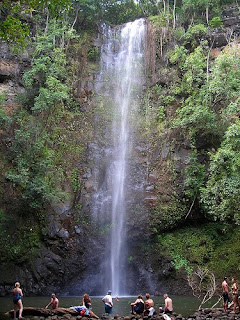 I recently went to Hawai'i for the American Society of Human Genetics meeting in Waikiki, followed by a one-week vacation on Kaua'i with friends. It was my first time in Hawai'i and I really enjoyed it. The Hawai'ians I encountered were kind and generous people.

Early European explorers remarked on the beauty, strength, good nature and exellent physical development of the native Hawai'ians. The traditional Hawai'ian diet consisted mostly of taro root, sweet potatoes, yams, breadfruit, coconut, fish, occasional pork, fowl including chicken, taro leaves, seaweed and a few sweet fruits. It would have been very low (but adequate) in omega-6, because there simply isn't much of it available in this environment. Root crops and most fruit are virtually devoid of fat; seafood and coconut contain very little omega-6; and even the pork and chicken would have been low in omega-6 due to their diets. Omega-3 would have been plentiful from marine foods, and saturated fats would have come from coconut. All foods were fresh and unrefined. Abundant exercise and sunlight would have completed their salubrious lifestyle.

The traditional Hawai'ian diet was rich in easily digested starch, mainly in the form of poi, which is fermented mashed taro. I ate poi a number of times while I was on Kaua'i, and really liked it. It's mild, similar to mashed potatoes, but with a slightly sticky consistency and a purple color (due to the particular variety of taro that's traditionally used to make it). 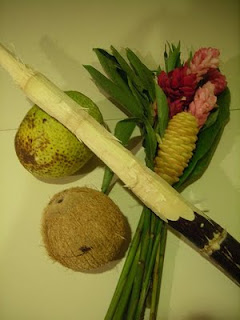 I had the opportunity to try a number of traditional Polynesian foods while I was on Kaua'i. One plant that particularly impressed me is breadfruit. It's a big tree that makes cantaloupe-sized starchy green fruit. Breadfruit is incredibly versatile, because it can be used at different stages of ripeness for different purposes. Very young, it's like a vegetable, at full size, it's a bland starch, and fully ripe it's starchy and sweet like a sweet potato. It can be baked, boiled, fried and even dried for later use. It has a mild flavor and a texture similar to soft white bread. It's satisfying and fairly rich in micronutrients. On the right are breadfruit, coconut and sugarcane, three traditional Hawai'ian foods.

I find perennial staple crops such as breadfruit very interesting, because they're much less destructive to soil quality than annual crops, and they're a breeze to maintain. I could walk into the backyard of the apartment I was renting and pick a breadfruit, soak it, throw it in the oven and I had something nutritious to eat in just over an hour. It's like picking a bag of potatoes right off a tree. Insects and birds didn't seem to like it at all, possibly because the raw fruit exudes a bitter, rubbery sap when damaged. Unfortunatley, breadfruit is a tropical plant. Temperate starchy staples that were exploited by native North Americans include the majestic American chestnut in the Appalachians, and acorns in the West. These are both more work than breadfruit to prepare, particularly acorns which must be extensively soaked to remove bitter tannins.

One of the foods Polynesian settlers brought to Hawai'i was sugar cane. I had the opportunity to try fresh sugar cane for the first time while I was on Kaua'i. You cut off the outer skin, then cut it into strips and chew to get the sweet juice. It was mild but tasty. I don't know if it was a coincidence or not, but I ended up feeling unwell after eating several pieces. It may simply have been too much sugar for me. 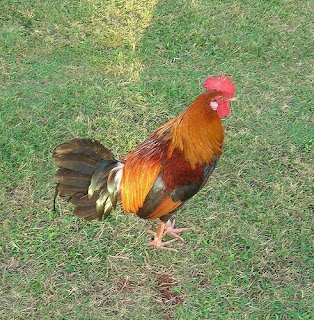 Modern Hawai'i is a hunter-gatherer's dream. There are fruit trees everywhere, including papayas, wild and cultivated guavas, mangoes, avocados, passion fruit, breadfruit, bananas, citrus fruits and many others. Many of those fruits did not predate European contact however. Even pineapples were introduced to Hawai'i after European contact. Coconuts are everywhere, and we could pick one up for a drink and snack on almost any beach. The forests are full of wild chickens (such as the one at left) and pigs, both having resulted from the escape and subsequent mixing of Polynesian and European breeds. Kaua'ians frequently hunt the pigs, which are environmentally damaging due to their habit of rooting through topsoil for food. Large areas of forest on Kaua'i look like they've been ploughed due to the pigs' rooting. Humans are their only predators and their food is abundant.

While I was on Kaua'i, I ate mostly seafood (including delicious raw tuna poke), poi, breadfruit, coconut and sweet fruits-- a real Polynesian style hunter-gatherer diet! I swam every day, hiked in the lovely interior, and kayaked. It was a great trip, and I hope to return someday.
. 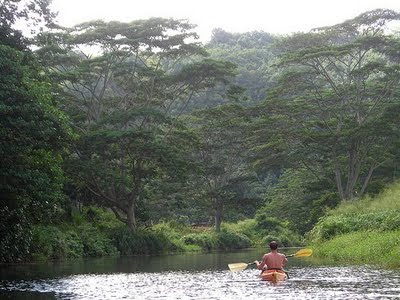 Posted by Stephan Guyenet at 8:00 PM

Great review! It has been a long time since I have been to Hawaii. I think perhaps it is time to go back. :-)

I wonder has anyone ever attempted to grow breadfruit stateside in a tropical clime greenhouse?

Stephan, glad to hear you enjoyed Hawaii. But a few facts to fix...

The only "native" fruits here are the ones whose seeds travelled in or on migrating birds. There are some small, bland varieties of blueberries, cranberries, and strawberries.

The Polynesians brought starchy (not sweet) bananas, breadfruit, taro, coconuts. The only sweet fruit was the mountain apple [http://www.instanthawaii.com/cgi-bin/hawaii?Plants.mapple]...

You left out dog and rat as great meat sources! Yes, the small Polynesian pig and, after Europeans, goats, sheep, cattle, and the large destructive European pig.

Sugar cane, papaya, mango and most of the other sweets were all introduced for agriculture after European contact.

As I was doing some (unrelated) research in the UH library today, ran across this fact: since there were no clay or metal sources for dishes, almost everything was eaten raw, dried or fermented. The exception was fire-heated rocks that would be buried to slow-cook a large animal on special occasions.

By the way, sugarcane does predate European contact on Hawaii.

yes breadfruit is fine. I tried it when I was on Comoros in 2000. The Comorian do mostly fry them, imo better than french fries.
When I was in Gabon I was surprised that it is not consumed there, people don't like it, although it grows everywhere (I have even a picture of a breadfruit tree in the Albert Schweitzer Hospital in Lambarene)

What a paradise! I hope to be able to visit sometime in this lifetime!

The traditional foods of Hawaii were showcased on a recent episode of "Bizarre Foods with Andrew Zimmern" (Travel Channel). While watching, I was struck by the widespread obesity of today's native Hawaiians! Was that your observation also?

I've done a week both on Maui and Kauai and much preferred the latter. I highly recommend a helicopter tour, though not as a replacement for getting out and walking around. But you do get to see some relatively inaccessible places.

The chickens are everywhere. I was told this happened back in the early 90s when they had the huge tropical storm that tore up various chicken coops.

I'll bet one could forage for excellent free range eggs just about anywhere on the island.

Excellent. I went to a Mycological Society of America conference in Hilo a few years ago and had the most spectacular fruit of my life. Never tried breadfruit, though.

I spent abot 6 mos. in New Zealand for PhD work about 10 yrs ago. The Maori of NZ eat a sweet/starchy tuber called kumara, which are now fried up as "kumara fries." Thus far I have not been able to find it in the US.

My memory is that women Pacific Islanders who were eating native diets were described by Westerners very early after contact on as becoming very fat as soon as they left their first youth.

Since Pacific Islanders have the highest rate of diabetes in the world, and do so due to a unique gene profile that does NOT involve the gene s associated with Type 2 diabetes in European (or Asian) populations, one has to wonder if their's was an adaptation to a famine stress event somewhere in the shared polynesian past.

The natural history of Pacific Islander diabetes is different from that of Europeans, too, and they start to develop complications at higher blood sugar levels than Europeans do.

"since there were no clay or metal sources for dishes, almost everything was eaten raw, dried or fermented. The exception was fire-heated rocks that would be buried to slow-cook a large animal on special occasions."

"The Maori of NZ eat a sweet/starchy tuber called kumara"

This is actually the South American sweet potato. There is a tradition in polynesia of a great navigator who managed to sail to South America bringing back wih him the sweet potato. Interestingly the name for Sweet Potato by the Quechuans in Peru is "Kumar". Perhaps from this we get kumara (Maori) 'umala (Samoa) 'umara (Tahiti) ' te kumara (Kiribati or 'uala (Hawaii) in Polynesia.

Also worth noting that tropical fruit was often left for the birds and bats to eat throughout polynesia. They weren't gorged on as often you might think despite being in a tropical setting...

Good to have you back. Sounds like a tremendous trip and of course good food. I have never been to any Pacific island but this post inspires me a bit.

It was nice to read that you found our ulu (breadfruit) to be so ono (tasty). Glad you enjoyed your vacation and mahalo for your wonderful review. Josephine

Stephan, it appears the kayaking and the waterfall picture are both from Kauai? And the waterfall is the 'hidden' one you kayak and then hike over to? If so, I loved that also...Waimea Canyon and the napali coast...we went over in 2002 and came back in 2005.
A passing British ship's doctor wrote of a Hawaiian man, who appeared to be in his 70's, who still could run down pigs and spear fish with the youngest men.
I wonder if Jenny's comment on the weight problems of the women had anything to do with household duties being more sedentary or the already introduced western diets?