Thanks to Matt Lentzner for organizing Gluten-Free January, and everyone who participated and completed the survey, we have a nice data set illustrating what happens when a group of people stop eating gluten for a month. Janine Jagger, Matt and I have been busy analyzing the data, and I'm ready to begin sharing our findings.

Although respondents were primarily from the United States, I'm happy to say that the data represent 18 different nationalities: 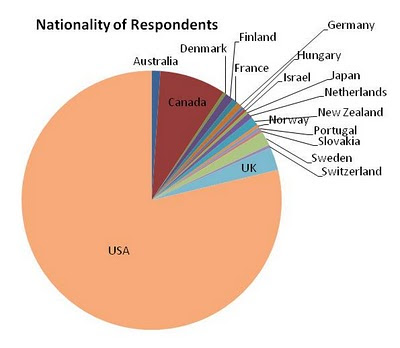 Respondents represented a diversity of ages, the largest group being 30-39 years old, with similar numbers in the 20-29 and 40-49 year groups. 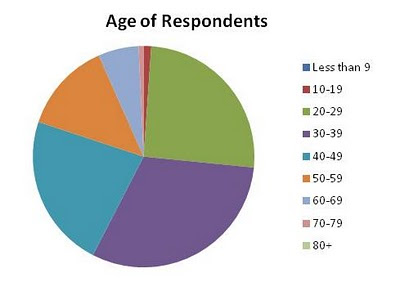 Respondents were just under 2/3 women. 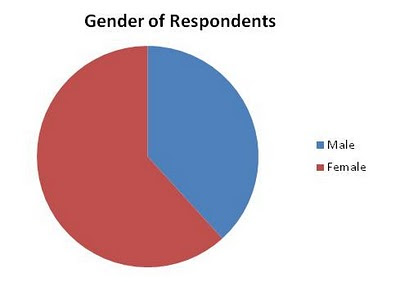 Respondents represented a variety of weights, but the sample was biased toward lean people, in comparison with the general population. There were not many obese participants. 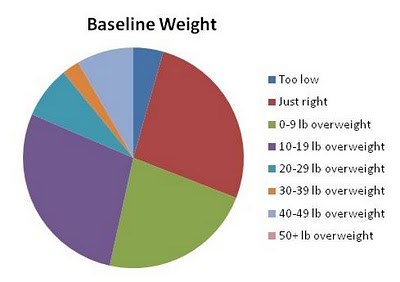 Overall, I was pleased to see that the demographics were quite diverse, particularly in the age and gender categories.

There are a few caveats to keep in mind when interpreting the survey results:
With that in mind, what can we take from the survey data? I feel that we can use it to answer the following question: "what is likely to happen when a motivated, health-conscious person decides to avoid gluten for a month?" And I think we can also use it to generate (but not test) hypotheses about the effects of eating gluten on the general population.
Posted by Stephan Guyenet at 7:00 PM

i find it interesting that 80% or more of the participants consider themselves from a bit underweight up to 19 pounds overweight. i wonder why there weren't more overwieght participants? are they less likely to experiment with something like an elimination diet?

Chuck: I would say - belonging, as I do to the slightly more than 19 lbs overweight demographic - that that group is actually far more inclined to try anything: desperation is a high motivator. I did offer (coming late to the party) to complete a survey, since I did effectively go gluten free in January, but was turned down by the powers that be. As it happens, my prediction that survey participants would likely self-select for success seems to have been borne out by the results. If you're interested, I derived no benefit whatsoever from gluten-freeness. Like a lot of people who struggle life-long with weight, and who tend to be highly cynical about gimmicks like this one (having tried just about all of them at one point or another) the overweight are far MORE likely to experiment with elimination diets than you slender hearty-parties who have no need for diets beyond curing the occasional blemish or stomach ache. We just don't get any good out of the process, and get mocked for it in the bargain, thank you.

thanks for the information on this blog! I find it very interesting and entertaining! hopefully soon have updates that I love your post! I thank you too!

There key issue is nationality and orgin to me. We know those who descend from the fertile crescent are better adapted to grains than Eurasians. That is an obvious confounder. None the less I like the informal data and we should study it so see what we can garner. I have most my patients avoid all grains anyway so I think it helps. Those from the middle east seems to be well adapted to grains.

Simoons suggested that gluten (wheat, barley and rye) consumption exerted a negative selective pressure on haplotypes predisposing to celiac disease (CD), which would explain why high frequencies of genes that predispose to CD occur in European populations with the least evolutionary exposure to cereal grains.

And this theory was accepted by most researchers, until CD specialist, Dr. Carlo Catassi, presented data challenging it.

It seems the overall prevalence of CD does not show a decreasing trend from European to Middle Eastern countries. Furthermore, as observed by Catassi, the DQ2 genotype, which is found in almost 90% of celiacs, is more common in Turkey than in the UK. On the contrary, the HLA-DR3 gene (in linkage disequilibrium with DQ2) is more common where wheat is a staple food, and rare or absent in populations traditionally consuming non-gluten foods. According to Catassi, this can be explained because the enteropathy derived from gluten intake (which was supposedly milder in early Neolithic farmers, in part due to prolonged breastfeeding and timing of gluten ingestion) may have conferred some protection against intestinal infections, therefore leading to the positive selection of CD predisposing genes.

We should not forget that sometimes genes important for early reproductive survival can be selected despite potential harm in old age. Other examples are hemochromatosis and various hemoglobinopathies that confer protection against malaria.

Finally, I remember reading a paper I can't find again saying that today's wheat has more gluten than ancient wheat.

Having said, gluten sensitivity exists and is not the same as CD.

And gluten ataxia and the role of gluten in autoimmune diseases and schizofrenia doesn't necessarily depend on CD.

I suspect under-reporting of weight played a role, as well as the group being leaner than the population at large.

The "powers that be" did not let you take the survey because it was closed to everyone by the time you asked, as I explained to you. I know people with serious conditions who would disagree with your flippant characterization of gluten sensitivity.

Thanks. I think it's really interesting the different way in which agricultural populations have adapted genetically. Some ofthe adaptations seem pretty crude in the sense that they have nasty side effects.

This results do not show what was intended.

They show that if you stop eating "bread, muffins, pasta, biscuits, cookies .... " etc, your health will in most cases be better.

How this connects to gluten is beyond me, gluthen being only 1 chemical there.

Its much more probable, IMO, that improved conditions are due to the low carb diet tendency.

Lets see how LC helps
- Immunity
Should be better, as sugars block Vitamin C as of GLUT competition which dampens phagocitic index of WBC substantially which leads to more infections with more symptoms. Aside, Vitamin C attenuates adaptive immune system which is responsible (at least in part) for autoimmune diseases.
Sugars also glicate proteins, immune system must degrade them, loosing valuable resources and leading to more production of proteins to replace the missing ones which means that cell doesn't do other things it has to do.

- Transit Problems
Mixing CH with proteins, which is what people typically do, slows down transit. Its one of the principles of food combining. CH is digested in alkaline environment while proteins in acidic. Together, digestion is slowed down for both. Also, food rottens and might cause immunity problems again.
On the other hand, less CH means less fiber, so that's negative factor. I suppose that most people compensated missing CHs with fruits, so fiber levels were probably similar in both diets.

- Acid reflux
CH alkalize the stomach which translates to less acidic environment which might lead to H. Pylori and other infections.

So, while it can be gluthen, its much more probable its the effect of reduced CH input.