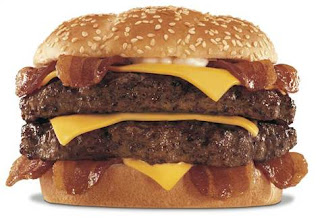 Two 1/3 lb beef patties, four strips of bacon, three slices of American "cheese", mayo and bun.  This bad boy boasts 1,300 calories, 830 from fat, 188 from carbohydrate and 228 from protein.  Charred and fried processed meat, fake cheese, refined soybean oil mayo, and a white flour bun. You might as well just inject it directly into your carotid artery.  Add a large fries and a medium coke, and you're at 2,110 calories.  Who's hungry?  Actually I am.


Hardee's has decided not to beat around the bush with salads and other such healthy nonsense.  Why?  Because people say they want them, but no one buys them.  Low calorie density, unrefined, simple natural foods are bad for the bottom line.  Huge, calorie-dense burgers with bacon and tasty sauces, advertised on the roadside and on TV, make people pull into Hardee's and open their wallets.  Here's a quote from Hardee's CEO Andrew Puzder (via MSNBC):


"This is a burger for young hungry guys who want a really big, delicious, juicy, decadent burger," he said. "I hope our competitors keep promoting those healthy products, and we will keep promoting our big, juicy delicious burgers."

This is hilarious and disturbing, but I do admire his honesty.  Pudzer has clearly grasped the magic of food reward-- it's so powerful it can trump a person's concern for his health, just as gambling or drug reward can trump a person's concern for his finances or health.  He even skillfully used language in the interview that triggers the desire to eat his burgers, turning the interview into an effective marketing tool.  Hardee's strategy of saying au revoir to health foods and focusing on highly rewarding calorie-dense items has been quite good for business.

Posted by Stephan Guyenet at 4:00 AM

You have never fully elaborated on the negative aspect of harshly cooked food, eg bbq.

I love the taste of a grilled (grassfed) steak, and you would think that this liking of otherwise indigestible proteins would have some sort of evolutionary basis.

Any chance of a full post fleshing out your thoughts on this?

I must admit, I really want to take the bread off that thing and eat it.

You could always eat the food you write your blog post about to make it a really rewarding food reward Friday!

Seems fine if you throw away the bun.

Alternatively, you could throw away the inside and just eat the bun.

I do wonder about the browned meat, after all, unlike all other animals, we've been cooking two million years, and made the switch to requiring cooked food one hundred thousand years ago. Lab rats haven't had the time.

I would like to say, Grilling is not BBQ. Grilling a steak is an insult to BBQ. BBQ is low and slow and the best way to cook meat with out causing the problems of high heat, searing the meat.

I know people say, lets go over and have a BBQ, its not unless there cooking something at low temperature for a long time.

Of course it's possible that Purdee said "healthy" in quotes, in the ironic sense of knowing that much of the "healthy" food produced by his competitors is not in fact any better than his Whopper, just worse tasting because of its "health" pretences.

All I'm going to say is that about once a quarter or twice a year, I go for one of these and love every friggin' last crumb. If you are going to indulge in a fast-food crap sandwich, make it this one because it is by far the best out there. All things in moderation and this is definitely the rare treat but when I have one, you would only get it back by prying it out of my cold, dead hand.

Last week's fixings didn't do it for me but this week's... damn, that burger looks deeeeeeelicious.

I always knew that Guyenet was really a schill for the fast food industry.

Now where are my fries to go with the burger?

Damn, that actually looks really good. I have succumbed to food reward!

How about the pizza with cheeseburgers in the crust?

I haven't yet found a version of this featuring boiled potatoes.

The satiety extracted from such a meal would correlate strongly to its caloric density such that consuming one of these for lunch every day would probably not lead to a dramatic increase in body fatness in the same way that consuming soda with every meal would.

There's a significant difference between non-nutritive empty calories that provide negligible satiety and something like this, which would keep most people sated for quite some time.

I see people point to things like this in order to explain the rise in obesity but it seems misdirected. It's never the burger, it's the drink next to it.

> significant difference between non-nutritive empty calories that provide negligible satiety and something like this, which would keep most people sated for quite some time
____
Nice idea. where's proof?

Good proof AKA controlled, randomized and replicated many times?

It's so awful that even though I know it's bad.. I still want it. I haven't eaten a burger in... I'd say five years, but it still looks delicious. OR maybe it's those happy childhood memories (getting takeaways was always a nice family time, compared to the stress of making dinner!).

"But that burger is half of my calories for the day!"

"How long did it keep you full?"

yes, you need skepticism and proof to do science

Unless your mind was made up before hand ...

"How long did your unproven nice-sounding ideas last?"

oh, it's great. thanks!
http://health.nichesite.org/category/food-recipes/food/

howabout having an egg as the next weeks nighmare meal. A single egg yolk contains as much cholesterol as that Hardee's monster burger.

You surely don't want to miss the opportunity to inform your readers about the +100 hundred experiments demonstrating that dietary cholesterol induces experimental atherosclerosis in virtually any animal model that it elevates serum cholesterol in, even when the elevation is considered to be small, this includes omnivorous non-human primates. Experiments on non-human primates have demonstrated that intake of even small amounts of dietary cholesterol as low as 43µg/kcal, the equivalent found in only half of a small egg in a human diet of 2,000 kcal induces atherosclerotic lesions. Furthermore, there was no evidence of a threshold for dietary cholesterol with respect to an adverse effect on arteries. This persisted even when the researhers made sure all micronutrient requirements were being met.

Several large forward-looking prospective studies on humans have shown that dietary cholesterol was associated with a significantly increased risk of all-cause mortality, and it has been consistently shown in studies on diabetic participants that intake of dietary cholesterol and eggs significantly increased the risk of cardiovascular disease and all-cause mortality.

Perhaps dietary cholesterol also in part explains the chronic prevalence of atherosclerosis in fossilized inuit bodies and the pre-condition of atherosclerosis that was confirmed in nearly all the autopsied American soldiers during the Korean and Vietnam war.

Your post is very nice and useful for people

As a previous 295 lb VFK (Very Fat Kid) I look back and realize that part of the reason I was so freakin' fat is because at that time in my life food was my only easily obtained reward.

I think the problem with so many people is that first they become depressed, or feel "stuck", and the ONLY thing they can find that is rewarding is the taste of deep-fried twinkie calories.