This week, Food Reward Friday is going to be a little bit different.  I've received a few e-mails from people who would like to see me write about some of the less obvious examples of food reward-- foods that are less extreme, but much more common, and that nevertheless promote overeating.  Let's face it, even though they're funny and they (sometimes) illustrate the principle, most people reading this blog don't eat banana splits very often, much less pizzas made out of hot dogs.

So this week's "winner" is something many of you have in your houses right now, and which was also the subject of an interesting recent study... potato chips! 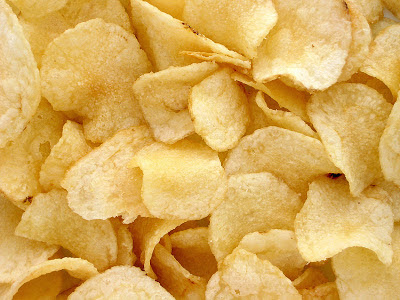 From a food reward perspective, potato chips are a deadly combination: very high calorie density, fat, starch, salt, and a nice crunch.  One bite leads to another.  They're a snack food that often adds to total calorie intake rather than replacing other foods.  From a health perspective, despite my love for potatoes, potato chips don't hit the mark.  They're deep-fried, usually in refined seed oils, and they encourage overconsumption.  By comparison, fresh potatoes are highly satiating per calorie (unless you put a bunch of calorie-dense stuff on them), oppose overconsumption, and are not usually eaten as snack foods.  This is due to their lower calorie density and lower palatability.

Humans love potato chips, but not as much as rats do!!  In the next post, I'll describe an interesting recent study in which researchers examined the brain activity of rats exposed to potato chips, a highly rewarding/palatable food.

Posted by Stephan Guyenet at 3:00 AM

This post tracks with a 2011 Harvard multi-cohort analysis that found that potato chips were the food most associated with weight gain over time in US adults.

I have a hard time eating just one...

Potato chips are my number one deadly snack food.

It's interesting how texture, crunch and so forth play a role in palatability. I always found the heavily folded chips to be the best tasting. If they ever release a bag that is 100% folded chips, it'd be the death knell for us all.

I think that golden color also contributes to the palatability too.

My ultimate nemesis is an already-opened bag of Miss Vickies kettle-cooked jalapeno chips.

I've wondered for a while whether acrylamide, as a neurotoxin, plays a similar role to MSG in confusing the appetite control system.

There's a theory that our love of crunchiness is inherited from our insectivore ancestors.

I don't eat a lot of potato chips, but I am super embarrassed to admit how much I snacked on the excess baked potato skins when I was making baked potato soup last weekend... Let's just say that few very of them made it to the garbage/compost! I don't even know how to begin to explain this from a biological perspective.

I can easily inhale an entire large bag of Kettle Chips in one sitting. Of course, any weight gain is purely due to the potato invoking teh ebil insulinzez.

Potato crisps (chips) do nothing for me - but give me fried potato skins with (homemade) garlic mayonnaise - now that's heaven on a plate.

@George Henderson - The next time I have a bag of chips at hand, I am going to think of your comment. Maybe that will help re-train my brain and slow down my munching.

Ooh, just like a nice, crispy cricket! I think this may work.

"There's a theory that our love of crunchiness is inherited from our insectivore ancestors."

George .. not quite the same payback from a plate of fresh carrot sticks!

I generally don't like potato chips very much, so I tend not to overeat them. However I do like them when covered in vinegar or old bay, so I'll eat more in those cases. This to me shows that palatability plays a role in food intake, not just the way it spikes insulin.

Same thing goes with sugar. I don't like sugar cookies so I feel gross after eating them, but give me a palatable high sugar food and I'll be pigging out endlessly.

I would like to see more Food Reward Friday posts like this one (although the previous ones were really amusing).

I recommend you read this article that appeared in the NY Times on Wednesday. It makes a lot of sense and can explain a lot. I would love to hear opinions on it.
http://www.nytimes.com/2013/02/24/magazine/the-extraordinary-science-of-junk-food.html?nl=todaysheadlines&emc=edit_th_20130224&_r=1&

I'm not a big fan of potato chips, but my wife loves them.

For me it's pretzels.

If you read the study carefully, they lumped together potatoes and french fries in that figure. When they analyzed fries and potatoes individually, fries were strongly associated with weight gain while unprocessed potatoes were only weakly associated.

I have to wonder what was driving the association though-- for one thing, no one eats plain potatoes. People add sour cream, bacon, butter, etc. Second, demographics may be driving the association because poor people eat more potatoes and tend to be more obese. The Harvard study didn't adjust for demographic factors. Adam Drenowski's group here at UW recently reported an observational dataset in which potatoes were not associated with obesity. They corrected for demographic factors in that study.

This will sound a bit nutty and maybe I'm missing something but I was wondering if there might be some form of secular feedback loop bias (not a real phrase) at work here where past food recommendations in the US are driving (and confounding) some of the data?

I.e., are fruits, veg, whole grains, exercise, etc. associated with weight loss or no weight gain in a cohort started in the 1970's/80's because they've been the nutritional recommendations since the 1970's/80's?

So are the recommendations driving a healthy user bias or cultural bias (eg., the wealthy physicians eat, exercise, and sleep well while the poorer and culturally different nurses, eat and sleep poorly -there are MANY obese nurses, btw)? Harvard controlled for smoking which means they controlled for socio-eco. status (SES) somewhat but maybe not fully (as smoking was not as associated with low SES in 1980's/early-90's as it is now). Like you said, Harvard did not control for demographics (which I assume would include education and therefore SES).

So it would seem to me that maybe we're in some sort of echo chamber where the recommended lifestyles are simply proxies for healthy, wealthy, culturally-different people who worry about their health and vice-versa for "negative" lifestyles? Not that I'm saying veg, fruits, and exercise are not healthy or that potato chips are healthy.

Thanks for your time.

"If you read it carefully": boiled, baked or mashed potatoes are still 0.57, which as far as I can see is ahead of refined grains, juice, fried foods and sweets or dessert.

And I wouldn't say no-one eats plain potatoes. Loads of plain potatoes (maybe at most with some margarine) with a little meat and 2 boiled veg is still one of the commonest meals I know of in the UK and almost everyone I know who eats like this is overweight by middle age. (Admittedly in recent years, the curry seems to have overtaken traditional super-bland English stodge).

I consider that a possibility.

Yes, as I said potatoes not in the form of chips or fries were weakly associated with weight gain in that study (0.57 lbs for "boiled, baked or mashed" as opposed to 3.35 lbs for French fries and 1.69 lbs for potato chips, over a 4 year period).

The study was unusual for a couple of reasons. 1) they measured the association between diet CHANGES and weight changes, rather than the association of habitual diet with weight changes. Honestly I find it difficult to interpret these types of studies. If potatoes cause weight gain, shouldn't we be able to see this effect in people who consistently eat a lot of potatoes rather than just in people who suddenly decide to eat more potatoes? Why do certain people suddenly decide to increase potato consumption? We don't really know what motivates some people to suddenly eat more potatoes, but it seems there's a high potential for selection bias there. 2) the study didn't control for demographics.

I have no doubt that people eating typical diets in the UK tend to become overweight, but I think that would be difficult to attribute to potatoes specifically.

I recently gave up sugar to try to re-train my body to appreciate the natural sweetness in foods. Plain potato chips have been my occasional comfort food when I feel sorry for myself that I'm not eating sugar. Sigh.

I'm not going to feel too bad about it since I'm already underweight anyway. I just wish they were fried in better fats.

To all those who love potato chips or fries I would say that "everything that shines is not gold" and potato chips are worst enemies of anybody who loves it.
so it's entirely upon you that either you would remain in a company of your enemy or would smash it down and lead a healthy and happy life.