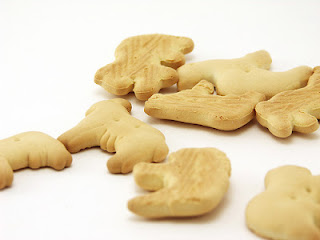 What's the history of animal crackers?


In 19th century Britain, a clever entrepreneur had the idea to make animal-shaped sweet biscuit snacks.  These became so popular that they were eventually exported to the US.  Manufacturers eventually began producing them domestically.  Today, Animal Cracker Products Inc. shares the US market with Nabisco, Keebler, and Stauffer, but our cracker is the only one that's still made from 100 percent animals-- the other products are up to 30 percent filler.

Can you explain how animal crackers are made?


The details are proprietary, but here's the general process.  First, we take baby animals and put them in a special patented press.  We apply high pressure for 17 hours, until they're flat and reduced in size.  We then dry them in the California sun for one week, which produces the characteristic texture and beige color.

How do you choose which animals to include?


Our primary market is children.  Focus groups have shown that children prefer crackers made from giraffes, elephants, and tigers to warthogs, opossums, and sloths.

We also choose animals that allow us to produce a product at a reasonable price point.  People love African savanna animals but they're expensive, so we mix them with less expensive animals like horses, bears, and sheep.  If there's enough interest in the Paleo community, we would consider making an all-African cracker mix, but the cost would be 50-70 percent higher.

Thanks for your time Robert!

Tiny animals?  What could be more Paleo than that??

Thank you Dr. Guyenet! I look forward to your April 1 posts every year.

I have to say I'm very disappointed with this post.

You do realise that sloths are exceptionally high in lectins and omega 6? Never mind that getting grass-fed sloth is next to impossible.

Very lazy research from you I expected better. :(

Sadly, I think I've seen this question on PaleoHacks in December.

That was excellent, thank you for the humor on a Monday! Cheers!

I thought animal cracker was a job title/description.

I have heard that some companies are using special packaging to separate prey and predator animals within the boxes. It reduces the number of missing limbs and other appendages on the crackers.

So does that mean chocolate bunnies are, too?

As a dues-paying-member of the Giraffe Anti-Defamation League, I object to the term crackers when referring to edibles inspired by our animal friends. It is inhuman to slur fabulous animals such as giraffes with a label synonymous with crazy. The more appropriate term is animal biscuits.

I have to tell this my vegan friend. She loves animal crackers...

My favorite part was the box.

Oh, I know, the box! These are NOT paleo. They are not cage-free.

Best ever. Comments too.