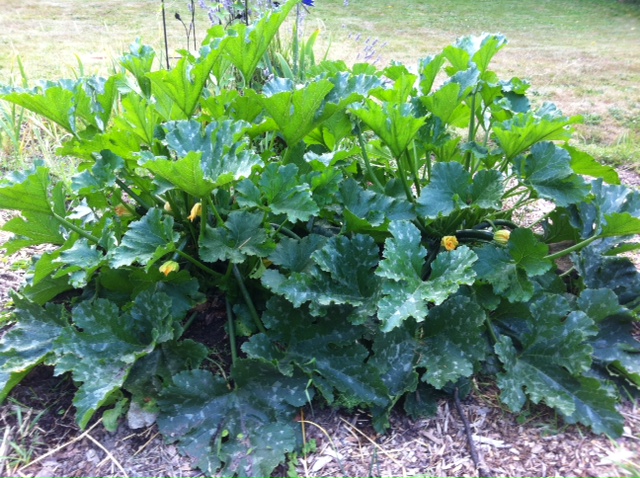 To give you a sense of scale, those plants are about four feet tall.  Each plant has been producing about two fruit per day for the last several weeks.  Here's a photo of my last harvest, which is two days' worth: 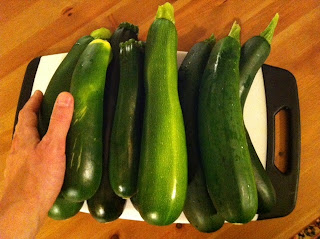 I picked six, thinking that was a pretty good harvest, then found three more lurkers under the leaves as I was watering.

Moral victory is mine!  Now I have to figure out how to use it all...

Friends have been getting a lot of zucchini, but I've also been exploring new ways to eat and preserve it myself, because I'm getting sick of eating regular cooked zucchini in every dish.  I've discovered that raw zucchini is quite nice when it's young and fresh; it has a crisp texture and mild flavor.  I doubt zucchini from the grocery store would be very good raw.  I've also been drying it, which is surprisingly good.  Zucchini "chips" are crunchy and a little bit sweet.  They're good on their own and can also be used instead of corn chips or bread for salsa and hummus.

I tried a few new things in the garden this year.  One is the Interbay mulch technique, which involves putting compostable materials directly on the soil, covering with burlap and letting it rip over the winter.  I used leaves for carbon and coffee grounds for nitrogen.  The leaves didn't compost as completely as I would have liked, but I'd estimate 50-60% of the material ended up being incorporated into the bed by the time I was ready to plant.  The soil doesn't look much different, but drainage seems significantly better.

The Vashon broadfork is a new addition to my tool repertoire.  Loosening soil with a broadfork is infinitely easier and faster than with a regular garden fork or shovel, and you can also loosen more deeply (14").  The broadfork is a useful but expensive tool that only makes sense if you have enough land area to make it worthwhile, and/or are obsessed with gardening.  I think the broadfork has something to do with how good my garden looks this year, although the consistently hot weather has certainly helped!  One of my beds gained 3" in height after loosening with the broadfork, a sure sign that compaction was going to limit root growth in my crops.  Deep loosening allows roots to penetrate further into the soil, increasing mineral and water access.

The third new thing I tried this year is corn.  The maritime Northwest is known for its relatively cool summers and short summer growing season, which conspire to make corn cultivation difficult.  It can supposedly be done with a little forethought though.  I planted a super early sweet corn variety called "Strong Start", which looks fabulous so far, though they haven't developed ears yet.

I'm most excited about the few plants of "Painted Mountain" corn I planted.  This is a flour corn harvested for dry grain, rather than a sweet corn harvested for fresh eating.  Painted Mountain is an open-pollinated corn developed by Dave Christensen over 30 years of selecting genetically diverse corn populations for the short season and rigorous growing conditions of his area of Montana.  It makes incredibly colorful ears and is supposed to be good eating.  I know I can't meet all my food needs in my 300 square foot vegetable garden, but I do enjoy experimenting with crops that could potentially feed me if I had more land (which I aim to someday).  Potatoes are #1 on the list, and they occupy about a quarter of my garden each year.  But corn is also quite productive and easy to plant, harvest, and prepare for a grain.

The Painted Mountain corn came up strong, but now looks a bit scrawny next to my taller, larger, greener sweet corn plants.  At first, I thought they were unhealthy, and I figured they were just poorly adapted to this region.  It turns out, that's just how Painted Mountain looks.  They only grow to 4-5' tall, and each plant produces roughly two 7" cobs.  I suppose that's what you get when you select for early yields.  Anyway, I look forward to harvesting corn from my four Painted Mountain plants, and making a bit of corn flour or polenta from them.  I'll have to hand-pollinate them so the kernels don't end up taking on the characteristics of the neighboring sweet corn too much.  If they yield well, next year I'll plant a full bed.

Posted by Stephan Guyenet at 8:13 PM

Try yellow zucchini next year. It's easier to see so they don't get too big. Or pattipan, which tastes the same.

If you eat zucchini when it's about 3 or 4 inches long you don't have the same surplus. The flowers are also good.

Zucchini makes good "noodles." Shave it with a potato peeler and cook a little with garlic.

I recommend Ronde de Nice. A French variety but it's easy to find in the US. Sweeter and less watery than green zucchini.

I can't recommend this enough: http://www.patismexicantable.com/2009/10/zucchini_torte_for_me_and_turns_out_for_my_mother_too/

Good rule of thumb for corn "knee high by the 4th of July" I come from a long line of farmers and gardeners and that is the rime that sticks out the most for me. As for zucchini have you made it into a bread? Thats what my grandmother does and she freezes her breads. At Christmas she sends some down to us which is a very special treat.

cutworms and other critters destroy mine every year before they get to fruiting stage..

Picking some of the flowers off the plants throughout the season helped curb our usual excessive output.

I have a friend who makes bread & butter pickles with zucchini instead of cucumbers. My own concoction is to use a julienne peeler on a couple very large zucchini (stop when you get to the seedy part and throw that away), then mix the beautiful fine strands into the dressing for the famous Thai green papaya salad (substitute zucchini for the papaya), with a little very thinly sliced onion. This is so good there are never any leftovers.

My (east of the Rockies) zucchini gets destroyed by squash vine borers by mid-summer.
Careful with that broadfork - to a man with a hammer all problems look like nails...
Like all tilling, you will degrade your soil over time (obviously not an issue on a compost pile). The aeration is speeding up mineralization of soil organic matter: short-term boost of productivity, long term compaction and degradation of the soil.
Keep up the composting and interbay technique - these add soil organic matter and improve soil structure (as you noticed). The soil fauna this attracts will create routes for roots to go deeper down and loosen the soil over time. Try not to step in your garden beds!
Great blog. I really appreciate the non-BS health info!

For the best PNW grain corns, I highly recommend you look into Carol Deppe. She is a plant breeder and author based in Corvallis, OR. Check out her website at: http://www.caroldeppe.com/ and very especially her book Resilient Gardener (http://www.amazon.com/The-Resilient-Gardener-Production-Self-Reliance/dp/160358031X), which talks about how she grows the majority of her calories using 5 main crops: potatoes, grain corn, winter squash, beans, and eggs. (She has celiac btw)

Oh, and for her corn varieties, you'll have to get most directly from her (don't wait! she has a very limited window for seed sales: http://www.caroldeppe.com/Seed%20List%202014.html)

Let me know what you think!

I dice courgettes and put them in spag bol (without the spag!).

Helps a bit with the glut but still get overwhelmed. Tried freezing last year but they defrost to a bag of water.