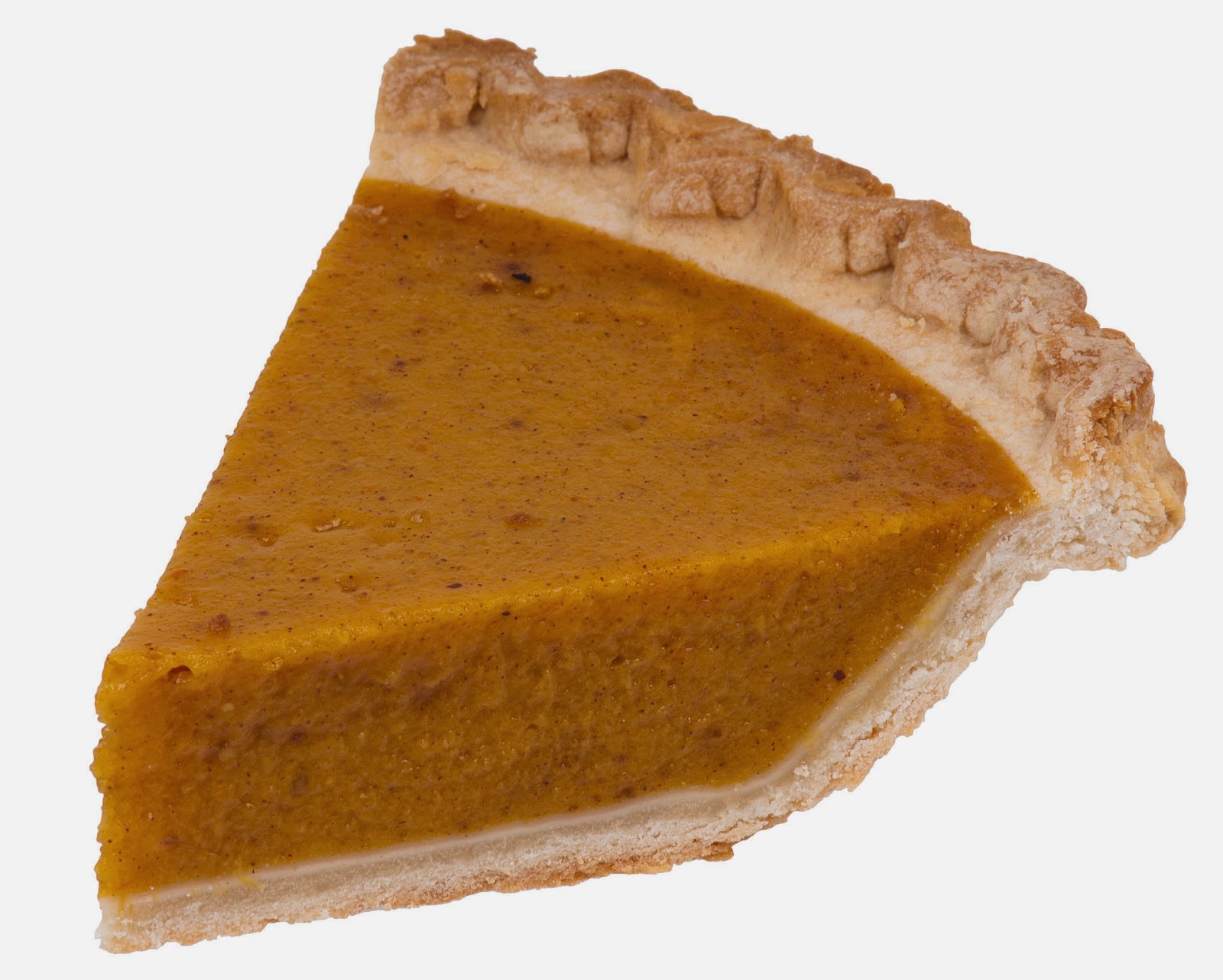 This venerable American tradition appears around the holidays, a time at which winter squash such as pumpkins have ripened and cured.  It's a little-known fact that the most commonly used vegetable in pumpkin pie is actually butternut squash-- not pumpkin.  Butternut squash produces the flavor and texture that most people associate with a traditional pumpkin pie, and it's the squash typically used in canned "pumpkin" puree.

Pumpkin pie is one of my favorite desserts, and there's nothing wrong with eating it from time to time.  It's actually one of the most nutritious desserts, due to the impressive nutritional value of winter squash.  However, like all pies, it comes out at the end of a meal, when most people have already eaten enough food to supply their energy needs.  We eat pumpkin pie on Thanksgiving, not because we need more calories, but because its physical properties make it highly rewarding and allow it to escape sensory-specific satiety.  In our subjective experience, we seem to "grow a second stomach".  That second stomach apparently has a capacity of several hundred calories.

My mother makes a nice alternative to traditional pumpkin pie that is lighter in calories and also gluten-free.  She simply uses layers of thinly-sliced apples in the bottom of the pie pan instead of a crust.  It works out well.

Photo provided by Evan Amos via Wikipedia.
Posted by Stephan Guyenet at 3:00 AM

Stephan,
When I saw the words,pumpkin pie, I was dismayed. As a pumpkin pie lover, my favorite way to eat it is for breakfast, counting it as a relatively harmless endulgence.

However, I do make it myself, using pumpkin puree that I've drained.

So happy that it's not in the same catagory as Pizza Hut Doritos Crunchy Crust Pizza!

It's got *nothing* on Pecan Pie.

Thanks for sharing your Mom's idea to use thin apple slices in place of a nutrition-less flour and fat-based crust. I'll definitely try this. Whether the filling is made from butternut squash or real pumpkin puree, I'm relieved to read that it is relatively healthy (or can be made so) since it is a very tasty dish.

I made a crustless pumpkin pie recently and it was excellent. Next time I'll try it with apple slices on the bottom. It should hold the pumpkin stuff together better. Good idea.

Pumpkin pie is the one of American foods I could never develop a taste for, like a root beer, Dr.Pepper, wintergreen gum, boiled peanuts. Appreciation for foods could be cultural.
Using slices of apples as a crust is interesting, but my guess most apples would not hold shape well, unless dried apples are used. May be thin slices of a winter squash could be used as a crust more successfully.

I agree Galina. As a Hungarian, pumpkin pie is a weird thing. But once I made it 'my' way which is lots and lots of spices and sour cream instead of evaporated milk or whatever they use in the usual recipes, it was not so 'blah', the pie was delicious.
You just have to get over the fact that in North America people eat pumpkin unlike in Eastern Europe where pumpkin is fed to the pigs. :) Besides which, you don't need to use pumpkin. You can use Kabocha squash which is drier and sweeter.

In Eastern Europe pumpkin is consider to be a good food. People eat it baked, it is added to porridges like rice and especially millet ones. Probably, the traditional set of spices which is used in a pumpkin pie in North America tastes too unusual for me. My guess, the liberal use of spices came here from traditions of Great Britain which in turn came from its colonial history.
I should attempt a pumpkin custard with savory flavors, garlic and ginger and a crust made with slices of pumpkin.