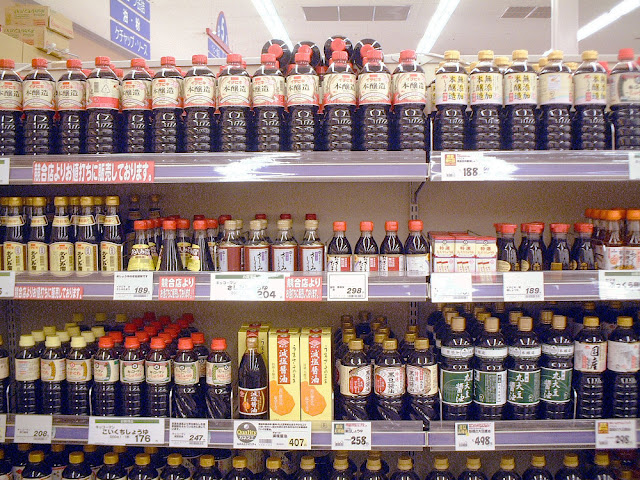 Food Reward Friday isn't just about culinary monstrosities created by profit-hungry corporations.  It's also about the everyday items, lurking in all of our pantries, which increase the reward value of our diet and sometimes cause us to overeat.

Soy sauce is a traditional flavor enhancer used in many parts of Asia, and it has been around for at least 1,500 years.  It's a concentrated mixture of amino acids and salt, produced by the fermentation of soybeans and grains.  The fermentation process breaks down the protein in soybeans, releasing amino acids including glutamate-- the "umami" amino acid that gives soy sauce its meaty punch.

The combination of meaty glutamate and salt is a potent one for our reward-sensitive brain regions, which are attuned to both flavors.  Chefs have long known that glutamate, found in soy sauce but also industrially produced in crystalline form, draws people to their food.

The history of food processing technology has been one of gradually increasing the concentration of the rewarding "active ingredients" in food, and soy sauce falls squarely in this pattern.  The original way of getting glutamate was via cooked meat, and this may be why our brains are attuned to it.  Eventually, we figured out how to get more glutamate by boiling bones or seaweed in water.  Then, we invented high-glutamate fermented sauces like fish sauce and soy sauce.  The final step was learning to produce crystalline monosodium glutamate, the purest form of the rewarding "active ingredient" the human brain seeks.  MSG is the crack cocaine of glutamate.

With each technological advance, the link between reward value and nutritional value became weaker.  MSG is the culmination of this trend-- it's pure flavor but it contains virtually no nutritional value.  Soy sauce lies somewhere between meat and MSG.
Posted by Stephan Guyenet at 10:07 AM

And some of the SE Asian soy sauces (Thai "Black soy," Malaysian and Indonesian "kecap manis") combine all the glutamate goodness with sugar.

Doesn't it at least get some credit for being fermented? I thought fermented foods were good for you.

I'm not necessarily saying it's unhealthy. Only that it can drive overeating sometimes.

I haven't seen any studies on the potential probiotic effect of soy sauce (haven't looked into it), but it's certainly plausible.

"I'm not necessarily saying it's unhealthy. Only that it can drive overeating sometimes."

That's a great point. There is this pervasive notion that eating *healthier* leads to weight loss. Nope! Eating *less* is much more reliable.

Now, to be fair, I don't know if bland food leads to weight loss, I've never seen it tested (in humans, with a cmparison group, long term).

I use fish sauce (very similar to soy sauce) often in cooking vegetables because it makes it easier for me to eat them as a main dish, taking up more of my plate than other less nutritious things.

As I'm not a big fan of soy products I've recently switched to using coconut amino's for flavoring things.
Does this have the same effect as the soy sauce?

Good point. I do something similar. I use small amounts of soy sauce to perk up certain dishes that are too bland, often beans or veggies. Broth works better, but soy sauce is a partial substitute if I don't have any on hand.

Yes, the key ingredient is the glutamate, which is present in both.

Stephen, years ago I read that when black pepper is added to food, people eat more. So there's maybe another flavour additive that contributes to over eating.

I think most sushi, including rolls, sucks without soy sauce. It probably has the worst flavor:cost ratio of any food (very bland, very expensive). Throw that raw fish wrapped in rice and avocado in some soy sauce, and all the sudden you've got a flavor explosion worthy of 4 rolls worth of consumption! Sometimes I'll have sashimi without soy sauce, if its a really rich oily fish.

I've noticed in the sushi restaurants around me that several now only serve low sodium soy sauce, explaining that it tastes the same. I don't notice the difference, and have thought that strange. I'd always thought saltiness was the magic of soy sauce. I hadn't considered the umami aspect, but that would possibly explain why lower sodium sauce has comparable enhancement effects.

I don't like soy sauce much and don't care much for super-salty things in general (though I do like the sweeter, garlic-flavored, teriyaki sauce--such as in teriyaki steak), but I do like sashimi, particularly tuna. I ignore the soy sauce and for the less tasty fish I add some wasabi mustard, which presumably also enhances food reward.

Stephan, I'm curious if your work with food reward, "why we eat", etc. has taken you into the territory of eating disorders, and what you or your colleagues have learned.