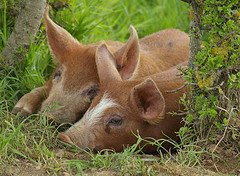 Your great-grandmother would have told you that natural, homemade lard is an excellent cooking fat. It has a mild, savory flavor and a high smoke point. It's well suited for sauteing and frying foods, and it makes the flakiest savory crust. It's also cheap to buy and easy to render. Rendering lard is the process by which fat tissue is turned into pure fat. I buy the best quality lard available for $2/lb at my farmer's market, making it far cheaper than butter and olive oil of equivalent quality.

The best place to buy lard is at a local farmer's market. Look for pigs that have been "field-raised" or "pasture-raised", and are preferably organic. This ensures that they receive sunlight and have been treated humanely. The "organic" label by itself simply means they have been fed organic feed; the pigs will often not have had access to the outdoors. I recommend avoiding conventional (non-organic) pork at all costs, because it's profoundly inhumane and highly polluting. This is where I buy my lard.

If you don't have access to good quality local lard, there are a couple of sources on the Local Harvest website. Look for "leaf lard", which is the fat surrounding the kidneys. It's lowest in polyunsaturated oil and thus has the highest smoke point and the lowest omega-6 content. It's also practically pure fat. You will recover 90% of the pre-rendering volume from leaf lard. On to the recipe.


Ingredients and Equipment:
1. Preheat the oven to 225 F.

2. Cut off any pieces of meat clinging to the fat.

4. Place them into a non-reactive baking dish and then into the oven.

5. Over the next 2-3 hours, periodically mash the fat with a potato ricer or the back of a large spoon. The fat will gradually separate from the residual protein as a clear liquid.

6. When you are satisfied that you've separated out most of the fat, remove the baking dish from the oven and allow it to stand until it's cool enough to be safe, but warm enough to be liquid.

7. Pour through a cheesecloth into jars. Save the "cracklins", these can be eaten.

8. If you plan on using the lard for crusts, cool it as quickly as possible by placing the jars in cold water. If the lard solidifies slowly, it will have a slightly grainy texture that works less well for crusts, but is irrelevant for other purposes.

Finished lard has a long shelf life but I like to keep it in the fridge or freezer to extend it even further.

Posted by Stephan Guyenet at 6:19 PM

Thank you for rendering unto me that technique.

It sounds really simple and straightforward to make. Even as a non-pork-eater, I think this information about lard and vitamin D is great, and I appreciate the ethic of using the whole animal.

I'm not sure, from a cultural standpoint, that anyone's latke-making grandmother would fry them in lard (even if I have a slight suspicion that you put that in there as an affectionate tease). I do appreciate the idea for its irony, but maybe you could post a schmaltz recipe too?

I've made lard and schmaltz - it's basically done the same way, though I used a heavy large pan on the stovetop instead of the oven. Yum!

Latkes aren't just for Jews! My aunt makes a killer latke with home-grown potatoes. Still, I admit it might not have been the best example.

I don't know how to make schmaltz; is it possible to buy chicken fat?

I just use the large pads of fat that are attached to the cavity opening of a chicken. I have noticed that commercial chickens have more fat than the ones I get from a local farm. Must be a result of exclusively grain/chicken feed diet, rather than a more natural omnivorous diet of grain, greens, and bugs.

Schmaltz is a more perishable than lard or tallow, so making small amounts is better anyway. I keep a small jar in the door of my fridge. Too bad I don't roast potatoes anymore. Schmaltz beats olive oil hands down.

By the way, cutting chicken skin into bite size pices and spreading over a cooling rack on a sheet pan, salted and roasted, is awesome! Chicken chips!

Anna, thanks for the tip. I think I'm going to try that next time I buy a chicken. Too bad it doesn't have the vitamin D benefit of pork lard.

ha! i may go out and make me some lard just for the shock value.

nice blog, yo. you're not afraid to say what's what and shake things up. plus some gorgeous looking ladies leaving comments, damn.

wish i had something to say id have a blog too. keep 'em coming!

I'm not going to lie, I get a kick out of the shock value too. I really do like it though.

So, here's what confuses me. If eggs are a good source of vitamin D, why is chicken fat from those same chickens not a good source? Do chickens excrete a lot of their D in the eggs, or store it differently from pigs? Or is just that chickens have a little bit in their fat, but pigs absorb so much vitamin D through their (non-feathered, non-furry) skin that they leave chickens in the dust?

Nutritiondata.com isn't helping me on this; they don't have D levels for lard, chicken fat, or eggs other than chicken eggs.

From what I can tell, some animals don't store much D. Presumably because they evolved under conditions of frequent sun exposure. Humans are in this category. We store a bit in our fat, but not much.

Pigs are an exception more than the rule. Beef and lamb fat don't have much D. So it doesn't surprise me that chickens don't have much, preferring to pass the D on to their eggs. Vitamin D is an essential nutrient for development, as supported by the fact that it's in eggs (fish, reptile and bird) and milk.

If it is a grocery store chicken, then it was probably raised indoors and not a good source of vit d (even if labeled "free range"). But if it was pastured and raised out of doors in the sunshine, then I don't see why it wouldn't have vit d. I've run across info in several places that indicates Vit d is made in the feathers and fur of animals; self-grooming and co-grooming ingests the vit d.

This is really interesting, I must say. When you say that it has a "long shelf life," can you give me an estimate of how long that is. Do you just bottle it like you would jam or something like that? I'm very curious to try this and to store it for later use, like one would store crisco or the like.

Just wanted to get the answer emailed to me.

I store my home-rendered lard in glass jars, about the size of a pint. Then I keep them in the freezer. They'll keep a very, very long time that way. An open jar is always in my fridge, though, if you used it fast enough, I think you could keep smaller amounts at room temperature for a while (a couple weeks?) unless it was really hot. The pint size works well for my rate of usage (about a pint every other month?) for browning lean meat, greasing a sheet pan for sweet potato chips, etc. I haven't had any go off even when I was using the open chilled jar at a slower rate; I would use smaller jars if the rate of usage was slower than a pint every two months.

The only time I had a problem with spoilage & lard was when I followed a set of instructions that included adding water to the lard at one point in the rendering. The last jar of lard must have still had water in it because I kept it on the counter for a while and it molded at the bottom of the jar from the remaining moisture.

But the chicken fat I have rendered and kept in the fridge has gotten that "oil paint" smell that indicates oxidation after just a month or two. So I think it must be much more perishable (higher PYFA for sure) or perhaps I heated it too high or for too long and that broke it down prematurely. I try to use rendered & chilled chicken fat within a few weeks now (or else keep it frozen).

On a related note, I keep ghee (clarified butter) in a room temp cabinet, along with coconut oil and palm oil, and none of these has ever gone "off" despite a long time to use them up. But they are all more saturated than lard. I tend to think of the shelf life of lard as similar to olive oil.

Yup, that pretty much covers it. Thanks Anna.

I disagree about buying only "organic" pork. My huband and I raised conventional hogs and they were not treated inhumanely, they had access to the outdoors, and were not given feed that contained antibiotics. I would be suspicious of anyone selling and animal that they claim is organic - unless USDA certified. To truly be organic, the animal could NEVER have eaten ANYTHING that wasn't grown organically, which is very hard to accomplish. Remember, pasture-raised and organic are not the same thing.

I would buy non-organic field-raised pork over conventional organic pork any day. But I'd prefer to have both if possible, because of the environmental impact of producing non-organic feed.

99% of the conventional pork in grocery stores is not humanely raised. If you were to buy non-organic pork at a farmer's market or directly from a farm, it might be another matter.

Hi thank you so much for adding your voice to the small but hopefully growing movement of peope for Real Food! I've been making lard for about 6 years now, and I love it.

Hi, Where do buy the leaf lard it is very hard to find I live in PA right outside Philadelphia. Thank you for nice article you wrote and I agree with you about buying organic I do the same.