Humans on a Cafeteria Diet 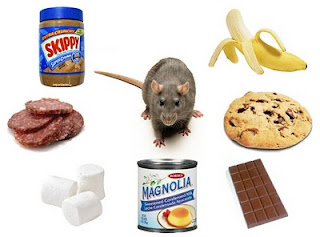 In the 1970s, as the modern obesity epidemic was just getting started, investigators were searching for new animal models of diet-induced obesity.  They tried all sorts of things, from sugar to various types of fats, but none of them caused obesity as rapidly and reproducibly as desired*.  1976, Anthony Sclafani tried something new, and disarmingly simple, which he called the "supermarket diet": he gave his rats access to a variety of palatable human foods, in addition to standard rodent chow.  They immediately ignored the chow, instead gorging on the palatable food and rapidly becoming obese (1).  Later renamed the "cafeteria diet", it remains the most rapid and effective way of producing dietary obesity and metabolic syndrome in rodents using solid food (2).

Chris Armstrong, creator of the website Celiac Handbook, has designed a new non-commercial website called Primal Docs to help people connect with ancestral health-oriented physicians.  It's currently fairly small, but as more physicians join, it will become more useful.  If you are a patient looking for such a physician in your area, or an ancestral health-oriented physician looking for more exposure, it's worth having a look at his site:

Update 9/22: apparently there is already another website that serves a similar purpose and has many more physicians enrolled: Paleo Physicians Network.

In this post, I'll discuss a few more facts pertaining to the idea that elevated insulin promotes the accumulation of fat mass.

Insulin Action on Fat Cells Over the Course of Fat Gain

The idea that insulin acts on fat cells to promote obesity requires that insulin suppress fat release in people with more fat (or people who are gaining fat) to a greater extent than in lean people.  As I have written before, this is not the case, and in fact the reverse is true.  The fat tissue of obese people fails to normally suppress fatty acid release in response to an increase in insulin caused by a meal or an insulin injection, indicating that insulin's ability to suppress fat release is impaired in obesity (1, 2, 3).  The reason for that is simple: the fat tissue of obese people is insulin resistant.

There has been some question around the blogosphere about when insulin resistance in fat tissue occurs.  Is it only observed in obese people, or does it occur to a lesser extent in people who carry less excess fat mass and are perhaps on a trajectory of fat gain?  To answer this question, let's turn the clocks back to 1968, a year before Neil Armstrong first set foot on the moon.

Hyperinsulinemia: Cause or Effect of Obesity?

Is Elevated Insulin the Cause or Effect of Obesity?

The carbohydrate hypothesis, in its most popular current incarnation, states that elevated insulin acts on fat cells to cause fat storage, leading to obesity.  This is due to its ability to increase the activity of lipoprotein lipase and decrease the activity of hormone-sensitive lipase, thus creating a net flux of fat into fat cells.  I'm still not sure why this would be the case, considering that fat tissue becomes more insulin resistant as body fat accumulates, therefore insulin action on it is not necessarily increased.  Total fat release from fat tissue increases with total fat mass (1), demonstrating that insulin is not able to do its job of suppressing fat release as effectively in people who carry excess fat.  But let's put that problem aside for the moment and keep trucking.

Catered Paleo Dinner with Yours Truly

Gil Butler, organizer of the Western Washington Paleo Enthusiasts group, has organized a catered "paleo" dinner on Sunday, October 9th.  He will be screening the first episode of "Primal Chef", Featuring Robb Wolf and others.  He invited me to give a short (20 minute) presentation, which I accepted.  There are still roughly 30 spots remaining [update 9/21-- the event is full].

The event will be in the Ballard neighborhood of Seattle and the price is $15.76 per person.  I will not be paid for this talk, it's just an opportunity to share ideas and meet people.

Book Review: The End of Overeating

The End of Overeating was written based on the personal journey of Dr. David A. Kessler (MD) to understand the obesity epidemic, and treat his own obesity in the process.  Dr. Kessler was the FDA commissioner under presidents George HW Bush and Bill Clinton.  He is known for his efforts to regulate cigarettes, and his involvement in modernizing Nutrition Facts labels on packaged food.  He was also the dean of Yale medical school for six years-- a very accomplished person.

Dr. Kessler's book focuses on 1) the ability of food with a high palatability/reward value to cause overeating and obesity, 2) the systematic efforts of the food industry to maximize food palatability/reward to increase sales in a competitive market, and 3) what to do about it.  He has not only done a lot of reading on the subject, but has also participated directly in food reward research himself, so he has real credibility.  The End of Overeating is not the usual diet book.