University of California, San Francisco researcher Dr. Ashley Mason has asked me to spread the word about a diet-health study she's preparing to conduct in collaboration with Dr. Lynda Frassetto.  Dr. Frassetto is a widely recognized expert on mineral metabolism and bone health, and also one of the few researchers who has managed to wrangle funding to study the health impacts of a Paleolithic-style diet.  Her findings have been quite provocative.

Together with their collaborators, Drs. Mason and Frassetto are preparing another diet-health trial to study the impact of two different diets on polycystic ovary syndrome, or PCOS.  PCOS is a common hormonal disorder among reproductive-age women, and its signs and symptoms include ovarian cysts, excess hair growth, menstrual irregularity or absence, infertility, and obesity.  Its causes are unknown, but insulin resistance is a core characteristic of it and is thought to play an important role.  PCOS is thought to be influenced by diet and lifestyle.

A research team including Drs. Frassetto and Mason, as well as Drs. Umesh Masharani, Heather Huddleston, and Michael Cohn will test a Paleolithic-style diet and an American Diabetes Asssociation diet to see if either or both improves insulin resistance and menstrual cycle regularity for women with PCOS.  Each diet will likely have beneficial effects, however it remains unknown which will be more effective at treating PCOS.
Currently, it's exceedingly difficult for researchers to land funding from the National Institutes of Health (NIH) to do nutrition-related research in the context of disease treatment or management, particularly if it involves a Paleo diet. Recognizing the important potential of fleshing out the relationship between diet and health, researchers are looking for other ways to fund their work.  This study will give them the early data they need to start large, truly definitive studies of the links between diet and insulin resistance, and you can help make it happen.
Please check out their crowdfunding website to learn more about the study, the researchers, and make tax-deductible donations to support their work. And, if you're attending the Ancestral Health Symposium, one of the "backer" rewards is having lunch with the researchers.


This post was prepared in part using content provided by Dr. Mason.
Posted by Stephan Guyenet at 1:56 PM 5 comments: 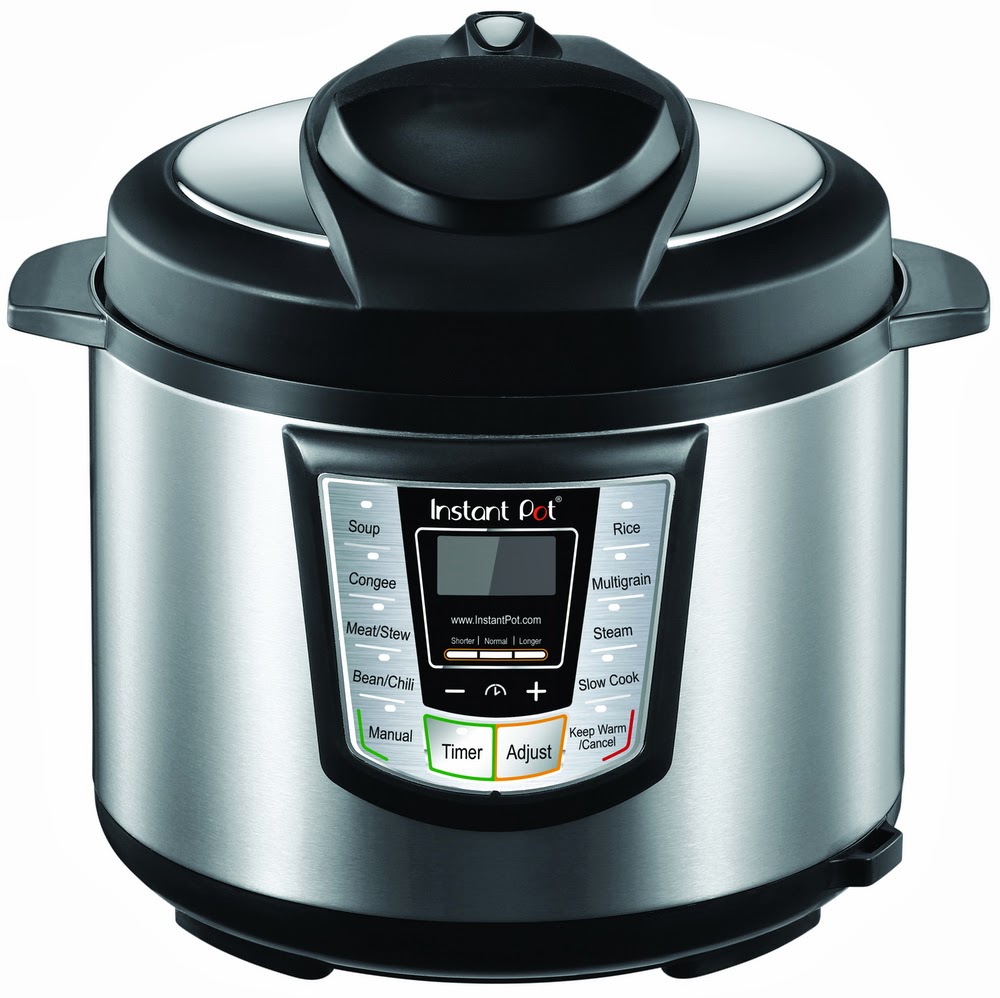 I've had several people tell me that the Whole Health Source post that changed their lives the most was one I published in 2012-- about a pressure cooker.

In 2012, I first reviewed the Instant Pot-- a "pressure cooker for the 21st century" that also doubles as a slow cooker and rice cooker (1).  Since then, we've used it more than 400 times, and it has saved us countless hours of kitchen drudgery.  It's indispensable for my current cooking style, and a major time saver for anyone who leads a busy life but still wants to cook wholesome food at home.  It's extremely satisfying to be able to put your ingredients into the Instant Pot, push a couple of buttons, do something else until it beeps, and then eat a healthy, inexpensive, and delicious meal.

Pressure cookers are one of the most time- and energy-efficient cooking tools, but electronic versions are even more efficient than traditional stovetop pressure cookers.  They're more time-efficient because you don't have to fiddle with them-- for example, adjusting the heat.  They're more energy-efficient because 1) they stop heating when the interior has reached the appropriate pressure, meaning that they're only using energy for part of the cooking process and they hardly vent any energy-wasting steam, and 2) they're insulated well enough that the sides never get hot.

I've used my Instant Pot for a wide variety of cooking tasks, and this is what it does best:

I have two talks planned over the next two months.  Hope to see you there!

If you want to understand the most rigorous science available on leptin resistance-- a key mechanism of obesity and a major barrier to fat loss-- this talk is for you.  This is my primary area of professional expertise; I have years of firsthand research experience on the subject and I've published a number of related papers in peer-reviewed journals.  The talk will be accessible to nearly all levels of expertise.  AHS14 tickets are available here.  I've pasted the talk's abstract below.

Leptin is the primary hormonal regulator of body fatness.  Obese people exhibit a resistance to leptin’s effects in the brain, causing the brain to oppose fat loss by multiple mechanisms.  Research in animal models suggests that leptin resistance may be required for obesity to develop.  How does leptin resistance occur, and what causes it?  Research has not yet provided us with definitive answers, but several plausible possibilities have emerged.  This talk will review what is known about leptin resistance and its causes.

Dr. John McDougall invited me to speak at his yearly symposium after viewing my TEDx talk "The American Diet: a Historical Perspective".  I look forward to sharing my thoughts and interacting with a different audience than I'm used to.  The talk will be an expanded version of the one I presented at AHS13.  Tickets are available here.  I've pasted a modified version of my AHS13 abstract below.

The pancreatic hormone insulin regulates the trafficking and metabolism of carbohydrate and fat, and its secretion is particularly stimulated by carbohydrate and protein.  Since circulating insulin is elevated in common obesity, and insulin influences fatty acid flux into and out of fat tissue, this has raised the possibility that elevated insulin causes common obesity, and that dietary carbohydrate is particularly fattening.  A large amount of evidence appears to support the hypothesis that insulin causes obesity, and a large amount of evidence appears to falsify it.  This presentation will outline a framework capable of reconciling this seemingly conflicting evidence.