I recently revisited a really cool paper published in the Lancet in 2009 on body fatness, biomarkers, health, and mortality (1). It's a meta-analysis that compiled body mass index (BMI) data from nearly 900,000 individual people, and related it to circulating lipids and various health outcomes.  This is one of the most authoritative papers on the subject.

Before I go on, a brief word about BMI.  Roughly speaking, BMI is a way to compare body weights between people while correcting for height.  If we simply compare the body weights of two people on paper, we might think a lean tall person is fatter than an obese short person simply because he weighs more.  BMI corrects for this, allowing us to compare weight for height, and it does so reasonably well.  The main problem with BMI is that it doesn't differentiate between lean and fat tissue, such that a bodybuilder might appear overweight by BMI.  Despite that limitation, BMI is a useful measure of body fatness in scientific studies that compare averages.  Its main advantage is that it's easy to measure: all you need are height and weight.

The paper is a goldmine, and I don't intend to discuss it all today, but there's one thing in particular that I do want to discuss because I think it's under-appreciated: the relationship between body fatness and blood lipids (e.g., cholesterol).  The cardiovascular research world has a mystery on its hands: why is the blood cholesterol of modern affluent nations so much higher than that of most non-industrial cultures?  Saturated fat and dietary cholesterol have been proposed as an explanation, but even if you're generous with the evidence, these cannot explain the full effect.

On to the data.  Have a look at the black squares, which represent non-HDL cholesterol in men, with BMI on the horizontal axis: 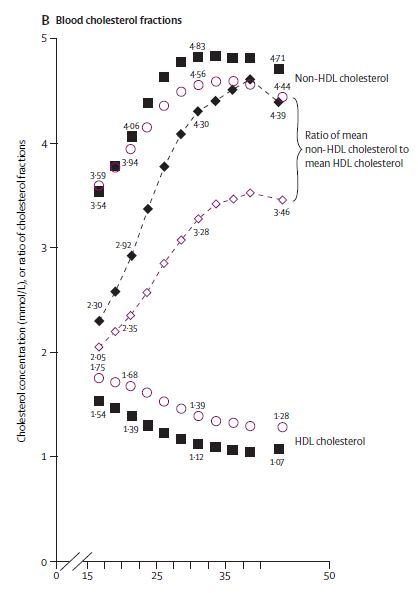 Going from a BMI of 19 to a BMI of 30 (very lean to obese) is associated with an increase of approximately 40 mg/dL (1 mmol/L) in non-HDL cholesterol, and a similar association is present in women (open circles).  That's a 27 percent increase-- highly significant from a cardiovascular risk perspective.

What's less surprising is the decrease in HDL cholesterol with obesity.  This has been described many times and is common knowledge.  But when you put the two together into a ratio (non-HDL to HDL), which has more ability to predict heart attacks than either alone, the result is even more striking.  From a BMI of 19 to 30 in men (black diamonds), the non-HDL to HDL ratio goes from 2.6 to 4.3, an 65 percent increase!  This is illustrated by the black diamonds in the figure above.  Again, the finding is similar in women.

Obesity is a known risk factor for cardiovascular disease-- we don't need this paper to tell us that.  However, what I think is most interesting is that excess body fatness, and/or higher food intake itself, may account for part of the difference in circulating cholesterol between industrial and non-industrial cultures*.  Body fatness may be a factor that explains our more dangerous lipid profile and higher prevalence of heart attacks relative to our ancestors.

Posted by Stephan Guyenet at 7:00 PM

Very interesting paper. Thanks for the tip.
http://dietasaludperfecta.blogspot.com.ar/

This NYT article caught my eye today and I thought of you:

I know it's not related to this post, but it's certainly very relevant to your research and the message you seem to convey on the blog.

Great find, Stephen! I doubt statins will reduce weight. The medical industry should take its cue from science and learn to distinguish between correlations that suggest causal relationships, on the one hand, and experimental studies that dissect cause-effect relationships, on the other. This clear-headed approach would prevent us from rushing to control "risk factors" with pharmacological agents designed to affect one physiological target. Talk about preventative medicine!

Thanks for the very interesting article, Dr. Guyenet.

It is interesting to see how these results conflict a recent, and much-maligned, 2013 JAMA obesity-mortality review by Flegal et al. http://www.ncbi.nlm.nih.gov/pubmed/23280227

The JAMA review made the reference group (BMI 18-25), as opposed to BMI ~22-25 in the Lancet, which means sick people and smokers might be in the JAMA reference group. This would explain the weird protective HRs for overweight and obesity grade 1 in JAMA in comparison to the Lancet data.

Many researchers are mad that the JAMA article has led to some media saying overweight and mild obesity are either not harmful (or even helpful) and I tend to agree and think this Lancet article should be used to counter the JAMA article.

Thanks for your doing this blog.

Yes, in the JAMA paper, the lowest-risk BMI was about 24. I think there are a lot of different issues to consider here. One of them is that a healthy, lean person will have the lowest risk of chronic disease and death, but between two people who already have a serious illness, it is possible that the leaner one will be in more danger.

The other one is confounding from people who have lost weight because they're already sick, as you said. The better you control for this variable in BMI-mortality studies, the lower it pushes the optimal BMI. Personally I think the true optimum is within the "lean" range (BMI 20-25), as suggested by the JAMA study, although what really matters is how much lean and fat mass you have.

Am I correct in assuming that this is mostly the result of the visceral and deep subcutaneous fat depots specifically and their greater transmembrane flux? If I recall, they put more fatty acids in the blood, thus causing the liver to manufacture more triglycerides and VLDL. The higher triglycerides result in lower HDL manufactured by the liver and the VLDL becomes sdLDL.
I think this explains the gender disparity due to android vs. gynoid deposition patterns.

To answer my own question above: data on lean, high saturated fat, high cholesterol people exist. It is called the Kitava study. Zero cardiac mortality.

I managed to read the NY Times thing Gunther points to. Appalling. These truly are dark forces against our society, and they hold all the cards.

The NY Times article you mentioned is depressing because it shows a huge amount of misdirected brain power and talent. Howard Muskowitz's efforts to build a better soda is like Werner Heisenberg's collaboration on the Nazi's atomic bomb efforts.

Imagine if the food industry research money was redirected towards better societal goals?

This is off-topic but here is a new documentary on childhood obesity in Brazil called "Way Beyond Weight" that is frightening to watch.

Ha @ Gunther Gatherer - I sent him the same article. It's actually an excellent article.

Yep, the forces that people today are up against, especially kids, are enormously powerful and organized to make sure your lizard brain takes precedence over all other thoughts.

These guys are not making food. They are making mind-altering drugs.

Gunther
I think the kids will revolt. I did eventually. The food at my very expensive English boarding school, which was mainly meat + refined carbohydrate, made me a semi-invalid with what would now be called chronic fatigue syndrome. I didn't go to university until I was 30. I wanted to go to university to find out what had happened to me. Now, 40 years later, I know. I think today's children will have to find it out for themselves like I did.

Great point. Seems like this relationship should be common knowledge given how tight the fit and how widespread the problem. Thanks for pointing us in the right direction as usual, Stephan.