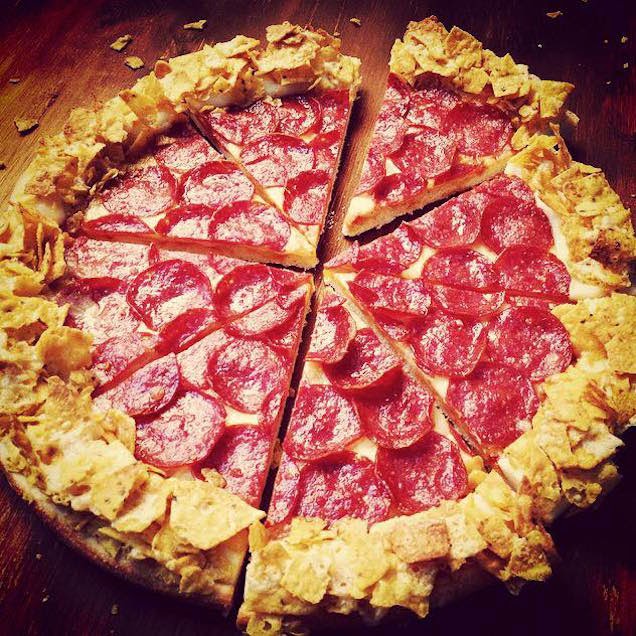 WHS reader David Lawrence sent me an article titled "Pizza Hut's new Doritos Crunchy Crust Pizza is every kid's dream food", and this Australian creation is indeed quite a beauty.  Not only is the crust made from Doritos chips-- it's also stuffed with cheese.

This pizza is a nutritional disaster.  But let's be honest: it isn't that different than regular pizza.  Why would anyone eat such a thing?  Food reward.

Is it true that Doritos pizza is a kid's dream food?  I do think it would be particularly compelling for children.  Children are more attuned than adults to basic food reward properties such as sugar and fat, and they also haven't yet developed cognitive aversions to particularly unhealthy foods.  They are also highly attuned to "cool" foods that confer social status in their peer group.  Children don't understand that they shouldn't eat Doritos pizza-- they only understand that they like it.

The pull of food reward on daily behavior becomes obvious when we consider the foods that US children eat the most of.  Here are the top five calorie sources for US children, according to the USDA (1):
Wow!!!
Posted by Stephan Guyenet at 9:13 AM

In other words that USDA list boils down to:

but hey, let's not forget that tomato sauce on the pizza.

I'm impressed. Not in a good way, but still impressed.

I have long said that pizza is like sex. It can be good, it can be great, it can be mediocre, but it's almost never bad.

Well, there was this joint in Baghdad that was a 40 minute drive, and didn't use yeast. Which meant by the time you got it back it was cold ass cardboard.

I'm just hoping I never have the equivalent in sex.

I am serious. I have seen your series for while and I am wondering whether this is a big joke. All posted foods are cheap and trashy type of foods. They are so cheap and common in USA that you do need to work any harder to get them. Any poor can get them. So I am just wondering why to post this kind of stuff as a 'reward'. Cheers

When I saw the ad on TV earlier this week my first thought was that it was a joke, I honestly did...

My immediate second thought was that Food Reward Friday was going to absolutely LOVE / HATE this.

I'm so glad I don't eat like 'normal' people any more or else I'd be tempted to try this, once, out of horrified fascination.

Hell, I'd eat it. Then thoroughly hate myself afterwards.

It's not a joke, although I am sometimes poking fun at the foods. Many of the foods I write about in FRF are ordinary foods that most people eat-- beer, potato chips, ice cream. I include strange ones like this sometimes for fun.

People really eat these foods-- even the strange ones. Otherwise they wouldn't sell.

Antonio, you need to read his blog posts on "food reward" to see what he means by this series.